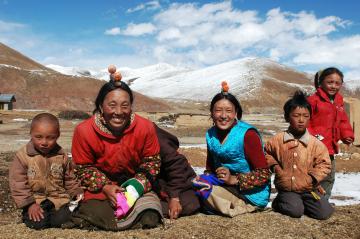 Gender refers to how biological differences between the sexes are used to classify, valorize and make meaningful social relationships between human beings. This is not to claim there is a clear divide between nature and culture or that there is an equivalence between the natural world and a single set of meanings. But it does mean that gender is ideological because the respective roles and attributes of men and women and are assumed to be the inevitable products of nature rather than the contingent and unstable outcomes of power relations. OSGA’s global and comparative approach uniquely enables this cluster to explore how social processes and power relations affect what meanings, values and norms are acquired in specific societies at specific points in time.  Specifically, this research cluster draws on data and conceptual insights derived from different empirical contexts to explore  how possibilities for human action are constrained by ideological parameters, especially by the gendered norms and expectations that structure policies and daily life in any given society, while also examining how such norms are contested and reworked and change over time. This research cluster supports and encourages cutting-edge conversations around the commonalities and divergencies across societies in individuals’ experiences of intersectional gendered inequalities, and the implications for human security, economic organization, cultural production, social movements, demographic patterns and political processes, locally, nationally and globally.

Gender, Sexuality and Empowerment is one of the Oxford School and Global Area Studies Research Clusters. This research cluster aims to host activities and build a wider research community that enriches the OSGA research environment focused on gender and increases the impact of the School’s gender-focused research beyond academia by:

The Gender, Sexuality and Empowerment cluster involves researchers, at all career stages, and aims to enhance and sustain their work by providing access to a community and to sources of ideas within and beyond OSGA and Oxford.

This cluster offers unique point of access to resources and opportunities for encouraging co-operation on gender and sexuality issues harnessing the strengths of regional and globally comparative perspectives.

Our research projects diversify Western-centric and neo-liberal approaches to gender by developing analyses of gender empowerment and gendered inequalities based on empirical data from different world regions. At the same time, our research projects encourage comparative perspectives by bringing country-specific and cross-country analyses into dialogue with each other and with mainstream theories drawn from research based on the West. Our research projects further aim to test and critique the translocal relevance of wider gendered concepts and theories. Our recent funded projects explore gender dynamics in Brazil, China, Eastern Europe, Japan, and Russia.

Gender Wars: East and South is an international, interdisciplinary network of scholars and an artist  focusing on gender and sexuality across Latin America and Central Eastern Europe in a comparative, cross-regional perspective. Its purpose is to bring together disciplinary expertise, area-based knowledge, and local know-how to shed light on how different institutional, religious, and cultural histories in and across these regions have contributed to the development of the contemporary backlash. Existing scholarship, mostly by political scientists, has mostly focused on the political dimensions of "anti-genderism", documenting the electoral successes of radical right parties, or the transnational backlash against anti-gender discrimination policies in countires with right-wing, conservative leadership. However, this has left significant cultural and historical dimensions understudied. What role have historical changes in religious life, family structures, and legal reforms in the field women's and LGBTQ rights played in generating contemporary "anti-genderisms"? How has the experience of various forms of authoritarian regimes and processes of post-authoritarian democratization influenced social and cultural perceptions of gender and sexuality? How have the effects of neoliberalism (for instance, changes in labour regulations and social welfare) intersected with "pro-family" conservative approaches in these regions?

Across a series of workshops, roundtables, and artistic interventions hosted by academics at network hubs (University of Oxford, Central European University, Federal University of Bahia, University of Amsterdam, University of Brasilia, University of Warsaw), Gender Wars aims to document the similarities, differences, and connections between "anti-gender" movements across the two regions by harnessing the specialist, area-based knowledge and local contacts of network members. It will bring scholars of "anti-gender" movements from across the Humanities and Social Sciences in dialogue with political scientists, in order to expose the historically, socio-culturally, and religiously specific dynamics in each region which generate and underpin the conservative backlash against women's and LGBTQ rights. Finally, it will expose the role of art in critically interrogating and resisting anti-gender movements in Latin America and Central Eastern Europe and integrate artist-led practice in the facilitation, recording, and dissemination of inter-disciplinary dialogues.

The project facilitated network and research development activities among scholars from The Oxford School of Global and Area Studies; the Institute of Ethnology and Cultural Anthropology at the University of Warsaw; the Department of Economic and Social History and Demography at the University of Groningen; the Department of the History of Science at University of Granada; and the Institute of Chinese Studies and the Department of Politics at the Free University of Berlin. The project activities entailed preparing literature reviews and holding online meetings on the gendered implications of demographic crises in Russia, Eastern Europe and East Asia, and on the theoretical and methodological potential of an intersectionality-inspired ethics of care for studying insecurities and crisis in contexts of low fertility and population ageing. The project also involved an initial stakeholder mapping exercise to support the development of a policy-relevant research agenda.

The Cultural Politics of a Demographic Crisis: Motherhood and the Nation in Contemporary Japan

This project explores how demographic change on the national level is experienced within the intimate lives of citizens in contemporary Japanese society, with a particular focus on how the relationship between motherhood and the nation is shifting under the influence of social discourses  surrounding “the Japanese demographic crisis.” Over the past several decades, scholarly attention in the social sciences has increasingly come to focus on the demographic phenomena plaguing Japan, namely its ageing population and low fertility rate. Existing work has either examined said demographic issues as the outcome or product of changing gender practices and economic stagnation, or alternately interrogated their significance for the Japanese labour market and pension system. In contrast, this project will aim to examine how demographic change also produces social and ideological effects that reconfigure the ways in which notions of motherhood are conceived, particularly in relation to the nation-state.

Communal Conflict and Inherited Trauma on the Tibetan Plateau: The Impacts of Social Upheaval on Gender and Family Relations

Recent history on the northeast Tibetan plateau has seen genocide, famine, and warfare. Scholars argue legacies of social upheaval and of racist/colonial policies result in high rates of violence against women in underprivileged communities, and these effects are transmitted intergenerationally. These scholars rarely investigate the experience of those who lived through the periods of greatest upheaval, however. Marital form (patrilocal, matrilocal, neolocal), central to women’s status in the home, is likely to be heavily impacted by upheaval, but is also rarely studied. This project will address these issues, via oral history interviews examining impacts of widespread social upheaval on family interactions. As collective trauma may be linked to increased interpersonal hostility in broader society, this study will look into changes in community relationships before and after upheaval. In Tibetan areas, public discussion of historical atrocities is politically forbidden. This project provides insights into the impacts of upheaval in this type of political context.

The United Nations has described Latin America as the most violent region in the world for women outside of war zones. 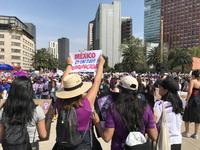 Moreover, women leaders – including peacebuilders, feminist leaders, and environmental activists – across the region have been targeted with violence, threats, and even death in the context of their struggle for social justice. Despite the dangers they face, these women continue to mobilise, demanding an end to the violence. This EU-funded High-Risk Leadership project (Grant Agreement : 838513) aims to study and document these mobilisations in the region, particularly in Mexico, El Salvador, and Colombia. 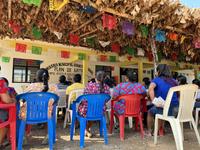 The project contributes to social movement studies literature on women’s leadership, and to further understandings of ‘High-Risk Feminism’ in 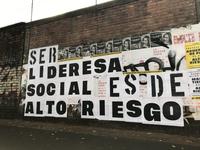 Sewing the City: Dressmaking and Modernity in Postcolonial Lubumbashi

Sewing the City seeks to provide a new history of the modern African city through analysing the work and lives of dressmakers in Lubumbashi. Rachel argues that Congolese seamstresses created new interpretations of what it meant to be modern, urban and Zairean, drawing on formal training, informal apprenticeships, and evolving networks of production, craft and taste. The project traces this history through interviews and in the personal collections of clothing, photographs, and equipment owned by many local dressmakers -  This project explores how women’s labour and creativity crafted the postcolonial city.

Lace and Licentiousness: The Politics of Shared Knowledge

What is the relationship between the political economy of craft knowledge, commercial innovation, and relations of gender? Focusing on innovation and entrepreneurial activity amongst lace makers and traders in the village of Koniaków, southwestern Poland, the Lace and Licentiousness project examines an example of how traditional, rural craft production has been able to reconfigure itself under the changing economic and cultural circumstances of post-socialism and EU integration. It focuses on how the commercial success of one product – handmade, crocheted lace underwear – has caused fundamental shifts in established norms of artistic authority, modes of apprenticeship, and commercial practice in the village. It explores how and why shifts in post-socialist cultural policy and the commercial landscape have coincided with the entrance of men into the previously all-female craft industry.  This development has affected the authority of female – mostly elderly – artisans and seen a diversification of the local community of female makers into self-employed artisans creating high end products, and casualized pieceworkers. Based on long-term ethnography, the project illustrates how new definitions of creativity, authenticity, and knowledge in the realm of the craft production intersect with local gender relations, age and aging, and community authority, shaping current conditions for artisans and traders in the region.

More details on events can be found here.

Tuesday 10 May 2022: People, Not Ideology": On the struggle for LGBTQ rights in Poland.

The Resources include publications, and links to external datasets/reports on women and gender. These can support research and co-operation on gender and sexuality issues.

Oxford School of Global and Area Studies (OSGA) offers a culturally vibrant and dynamic research environment for Early Career Researchers whose research focuses on an area or region and is interdisciplinary in nature.  Taking advantage of the vast network of resources available at Oxford, including the largest community of Area Studies scholars in the world, Early Career Researchers at OSGA expand their professional network, gain full membership to one of Oxford's 38 colleges, and gain scholarly independence during their time with the School.

If you are interested to apply to a funder or scheme not listed on our webpage, please contact the Research Development Officer to know if the School could support you.

We aim to engage with stakeholders both nationally and internationally to...

-          Tailor our future research strategies to ensure our research is impactful.

Our ongoing project is the creation and maintenance of a stakeholder database that will facilitate a better understanding of research interests and knowledge needs.

Please take part in the stakeholder survey. It requires only five minutes to complete.