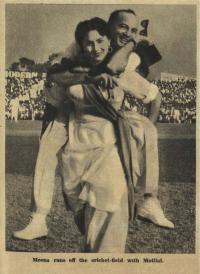 Relocating to Bombay from Lahore after partition, the refugee filmmaker Roop Shorey made a series of romantic comedies in independent India starring his collaborator-wife Meena Shorey. In these films, Meena wrestled men, scaled walls and drove tractors, demonstrating a complete disregard for received ideas of femininity, which most crucially involved making a spectacle of herself. This paper reads Meena’s performance in a trilogy of romantic comedies, Ek Thi Larki (Once there was a girl, 1949), Dholak(Drumbeats, 1950) and Ek-Do- Teen (One Two Three, 1954) as a response to the gendered trauma of partition. Reconstituted as the runaway girl, Meena’s unruly guise shares an allusive relationship with a partition figure – the abducted woman. While the literal instances of abduction within these films provide occasion for adventure and humour, the feminine abandon of the Shorey heroine speaks eloquently of her historical underside.

Salma Siddique trained as a film practitioner in New Delhi and completed her doctoral thesis, Between Bombay and Lahore: A partition history of cinema in South Asia at University of Westminster, London in 2015. She is now a Postdoctoral Research Fellow at the Berlin Graduate School Muslim Cultures and Societies, Freie Universität Berlin.

This seminar series is organised with the support of the History Faculty.