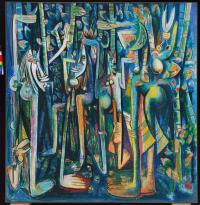 Bárbaro Martínez-Ruiz (B.A the University of Havana, Ph.D. Yale University, 2004), is an Art Historian with expertise in African and Caribbean artistic, visual and religious practices, whose work challenges traditional disciplinary boundaries and examines the varied understandings of – and engagement with – ‘art’ and ‘visual culture’. Following professorships at Havana’s High Institute of Art from 1993-1997, the Rhode Island School of Design from 2002-2004 and Stanford University from 2004-2013, Martinez-Ruiz joined the University of Cape Town, where he has served as the head of the Art History and Discourse of Art Department since 2013. He is the 2017-2018 recipient of the Leverhulme Visiting Professorship, hosted by Oxford’s School of Interdisciplinary Area Studies, and a Senior Fellow at St Antony’s College. His books include Kongo Graphic Writing and Other Narratives of the Sign, Temple University Press, 2013 (English) and El Colegio de México, 2012 (Spanish); Faisal Abdu’Allah: On the Art of Dislocation, Atlantic Center of Modern Art Press, 2012 and Art and Emancipation in Jamaica: Isaac Mendes Belisario and his Worlds, Yale University Press, 2007, for which he received the College Art Association Alfred H. Barr Award. Other recent publications include Ma kisi Nsi: L’art de habitants de region de Mbanza Kongo, in Angola figures de pouvoir. (Paris: Dapper Museum Press, 2010); Writing Bodies in the Bakongo Atlantic Experience, in Performances: Challenges for Art and Anthropology. (Quai Branly Museum Press, 2010); Funerary Pots of the Kongo in Central Africa, in African Terra Cotta: A Millenary Heritage. (Geneva: Musee Barbier Mueller Press, 2008), The Impossible Reflection: A New Approach to African Themes in Wifredo Lam’s Art, in Wifredo Lam. (Miami: Perez Art Museum Press, 2008).  In addition to his research and teaching, Martinez-Ruiz is an active curator, whose shows have explored issues of visual communication, dislocation and hybridity in the work of contemporary artists across the African diaspora. He also serves as an editor for the Cuban Studies Magazine and Harvard's Transition Magazine and was a researcher for Pacific Standard Time AL at the Getty Foundation and the Museum of Latin American Art, Los Angeles California from 2014-16.

This is a joint seminar with the History of Art Department and the African Studies Centre.