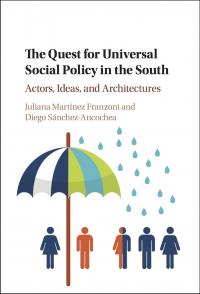 Abstract of the book to be launched

Universal social policies have the power to reduce inequality and create more cohesive societies. How can countries in the South deliver universalism? This book answers this question through a comparative analysis of Costa Rica, Mauritius, South Korea and Uruguay and a detailed historical account of the Costa Rica’s successful trajectory. Against the backdrop of democracy and progressive parties, the authors place at the centerstage the policy architectures defined as the combination of instruments that dictate the benefits available to people. The volume also explores the role of state actors in building pro-universal architectures. This book will interest advanced students and scholars of human development, and public and social policies as well as policymakers eager to promote universal policies across the South.

Juliana Martínez Franzoni is Professor at the University of Costa Rica (Institute for Social Research). Diego Sánchez-Ancochea is Director of the Latin American Centre (University of Oxford) as well as Associate Professor in the Political Economy of Latin America and Fellow of St Antony’s College.

Armando Barrientos is Professor of Poverty and Social Justice at the Global Development Institute at the University of Manchester in the UK. His research focuses on the linkages existing between welfare programmes and labour markets in developing countries, and on policies addressing poverty and population ageing. His most recent books are ‘Social Protection for the Poor and Poorest’ (2008, edited with D. Hulme, Palgrave); ‘Just Give Money to the Poor’ (2010, with J. Hanlon and D. Hulme, Kumarian Press); ‘Demographics, Employment and Old Age Security: Emerging Trends and Challenges in South Asia’ (2010, edited with Moneer Alam, MacMillan), and ‘Social Assistance in Developing Countries’ (2013, Cambridge University Press).

Maxine Molyneux is Professor of Sociology at UCL, with previous posts at the School of Advanced Study (SAS), Birkbeck and Essex. She served as Director of the Institute of the Americas at the SAS from 2008, then moved to UCL as founding Director of the UCL Institute of the Americas at University College London in 2012, serving in that capacity until 2014. She has written widely in the fields of political sociology, gender studies and development policy, and has authored books on Latin America, Ethiopia and South Yemen. She was recently Research Director of multi-country investigations into social protection including the DFID-funded 5 country ODI project Transforming Cash Transfers . Her latest publication is the Special Issue of the Journal of Development Studies ‘Can Cash Transfers have Transformative Effects’ (July 2016). Maxine is the Editor of the Palgrave/Springer Series Studies of the Americas.