LAC Main Seminar Series: Estallido - The beginning of the end for neoliberalism in Chile?

The deadline to register is 12 March at 12 noon

Chile’s explosion of social mobilisation, which began in October of 2019, continues to shape the national political conversation. Although initially sparked by a fare rise by the capital’s metro-system, the protests quickly became something much bigger. After a month of massive and intense protests, right-wing president Sebastián Piñera was forced to stop blaming the protests on criminal delinquency. Instead he started repeating the protestors’ slogan: “This is not about 30 pesos [the fare increase], it’s about 30 years [the length of Chile’s democratic transition]”. Given the deep grievances with the country’s neoliberal social model, the government had no choice but to offer a plebiscite to replace the country’s dictatorship-era constitution, widely blamed for preventing economic policy change. This plebiscite was won by 78% in October 2020 (with increased turnout despite the pandemic), signalling a new dawn for Chile. But what will the new constitution be like and will it satisfy protesters’ demands? This talk will analyse that key question and hopefully give some (tentative) answers. 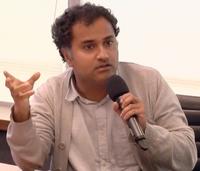 Hassan Akram is the Director of Wake Forest University’s Chile Centre and a lecturer in public policy at Diego Portales University. He has an MPhil in Development Studies and a doctorate in Social and Political Science from Cambridge University where his research interests were focused on the effects of Chile’s neoliberal economic model. In the same vein, he has recently published a book on how discontent with said model led to the latest national protests (Estallido – Why did it Happen and Where Will It lead Us? Ediciones BuenAire 2020). He has also worked as an advisor on trade policy for various groupings in the Chilean National Congress, with a particular focus on the Trans-Pacific Partnership free trade agreement.