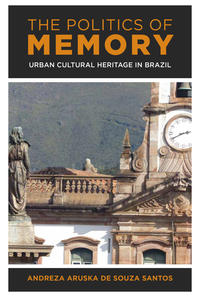 Andreza A de Souza Santos is Director of the Brazilian Studies Programme and Lecturer at the Latin American Centre at the University of Oxford. Her work examines how places can shape political personhood and how politics can determine city forms. The interaction between the built environment and the political life of a city is part of Andreza's urban ethnography. Looking at master plans, monuments, street names and participatory city planning, Andreza has authored the book: 'The Politics of Memory: Urban Cultural Heritage in Brazil', a discussion about which histories are remembered and forgotten in the making of a city and how residents contest or consent to official narratives about their place. She also wrote numerous articles on anthropology and urban studies, especially in the journals: Ethnography, Journal of Latin American Geographies, and Contemporary Social Science.

Sandra Jovchelovitch is Professor of Social Psychology at the LSE where she directs the Master Programme in Social and Cultural Psychology.  Her research focuses on human development under contextual adversity, the social psychology of public spheres, community development and the socio-cultural context of knowledge. She is the author of Social Representations and the Public Sphere: A study on the symbolic construction of public spaces in Brazil (Vozes, 2000); Underground Sociabilities: identity, culture and resistance in the favelas of Rio de Janeiro (UNESCO, 2013, with J Priego-Hernandez) and  Development as Social Process (Routledge, 2013, with S Moscovici and B Wagoner. A new classics edition of Knowledge in Context: Representations, community and culture (Routledge Classics, 2019) is out now.  She currently directs a RCUK-Colciencias funded project on Peace and Pathways to Reconciliation in Colombia.

Katerina Hatzikidi is a social anthropologist (PhD Oxford, 2018). Her main research area is Brazil, focusing on Afro-Brazilian (quilombola) grassroots political organisation around land and cultural heritage. She is Postdoctoral Research Affiliate at the Institute of Social and Cultural Anthropologist, University of Oxford, and Swiss Government Excellence Postdoctoral Fellow at the Graduate Institute in Geneva.