Tertulia at the Latin American History Seminar: The Mexican-American War, 1846-48 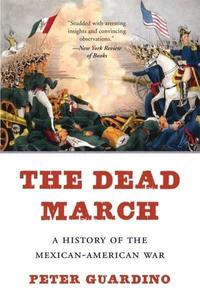 The deadline to register is 11 March at 12 noon

Peter Guardino is Provost Professor at Indiana University. He has published more than twenty articles and the books Peasants, Politics and the Formation of Mexico's National State: Guerrero, 1800-1857 (1996) The Time of Liberty: Popular Political Culture in Oaxaca, 1750-1850 (2005) and The Dead March: A History of the Mexican-American War (Harvard University Press 2017).  The latter won the Conference on Latin American History’s Bolton-Johnson Award for the best book on Latin American History, the Society for Military History’s Distinguished Book Award for the best book on non-United States Military History, and the Western History Association’s Robert Utley Award for the best book on frontier military history.  All three books have been translated and published in Mexico.  Guardino has received a number of prestigious fellowships, including three Fulbright awards and fellowships from the American Council of Learned Societies, the National Endowment for the Humanities, and the Social Science Research Council.

Timo Schaefer is postdoctoral fellow in the contemporary history and public policy of Mexico at the University of Oxford. Schaefer’s first book, Liberalism as Utopia: The Rise and Fall of Legal Rule in Post-Colonial Mexico, 1820-1900 (Cambridge University Press, 2017), described the formation of a fractured geography of legal rule in post-colonial Mexico, paying special attention to the legal culture of estate (hacienda) settlements, towns, and indigenous towns. Liberalism as Utopia won the 2018 Social Science Best-Book Award from the Latin American Studies Association Mexico Section, and the 2018 Best-Book Award from the Latin American Studies Association Nineteenth-Century Section (Honorable Mention). Schaefer is currently working on an oral-history project on the culture of political militancy in Mexico during the second half of the twentieth century, as well as on a panoramic history of the Latin American utopian imagination.