LAC History Seminar Series: In the Blood of our Brothers: Abolitionism and the End of the Slave Trade in Spain’s Atlantic Empire, 1800–1870

Register in advance for this meeting:

After registering, you will receive a confirmation email containing information about joining the meeting. 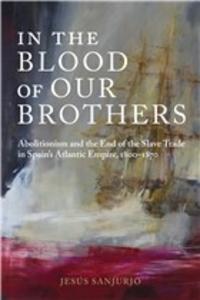 Jesús Sanjurjo is a Lecturer in Hispanic and Latin American Studies at Cardiff University and the author of In the Blood of Our Brothers (University of Alabama Press, 2021). In March 2022, he will be joining the University of Cambridge as an Early Career Fellow of the Leverhulme & Isaac Newton trusts. His new research project is entitled ‘Black Soldiers of the Caribbean: Race, Slavery and Radical Politics’. He studied History at the undergraduate level at the University of Oviedo and then obtained an M.A. in Race & Resistance and a Ph.D in Spanish and Atlantic History at the University of Leeds, under the supervision of Prof. Manuel Barcia and Dr. Gregorio Alonso. He was awarded an AHRC-WRoCAH Doctoral Studentship. Before joining Cardiff, he taught at the University of Leeds and the University York.  He has published various articles, in English and Spanish, and has recently co-edited a special issue for the journal Atlantic Studies: Global Currents on comparative abolition in the Atlantic and Indian oceans. He has also been commissioned by the journal European History Quarterly to direct a special issue on ‘Centering Blackness in European History’, which will be published in 2022.

Randy J. Sparks is Professor of History at Tulane University in New Orleans. He is the author five book and many articles and book chapters focused on the history of the U.S. South and the Atlantic World. His publications include Africans in the Old South: Mapping Exceptional Lives Across the Atlantic World (Harvard, 2016); Where the Negroes are Masters: An African Port in the Era of the Slave Trade (Harvard, 2013) and The Two Princes of Calabar: An Eighteenth-Century Atlantic Odyssey (Harvard, 2004).