LAC History Seminar Series: Britain and the Growth of US Hegemony in Twentieth-Century Latin America 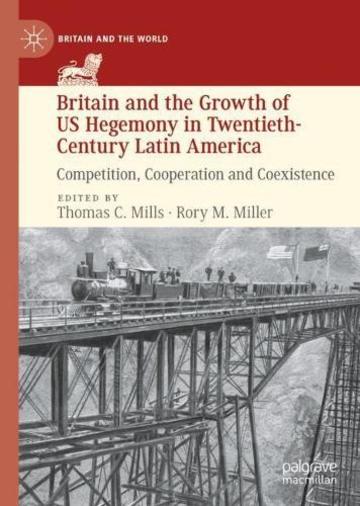 Rory Miller is Honorary Research Fellow at the University of Liverpool Management School and an Associate Fellow of Canning House. He was co-editor of the Journal of Latin American Studies from 2005 to 2014. His publications include Britain and Latin America in the Nineteenth and Twentieth Centuries (Longman, 1993) and Empresas británicas, economía y política en el Perú, 1850-1934 (Instituto de Estudios Peruanos, 2010), as well as two recently co-edited books, Capitalists, Business and State-Building in Chile (Palgrave Macmillan, 2019) and Historia económia de Chile desde la Independencia (RIL Editores, 2021)

Thomas C. Mills is Senior Lecturer in Diplomatic and International History and Director of the Centre for War and Diplomacy at Lancaster University. He is currently Chair of the Transatlantic Studies Association and an Associate Fellow at Canning House. He is co-editor of Britain and Growth of US Hegemony in Twentieth Century Latin America (Palgrave-Macmillan, 2020) and author of Post-War Planning on the Periphery: Anglo-American Economic Diplomacy in South America, 1939-1945 (Edinburgh University Press, 2012). He is co-author of a policy paper entitled ‘Revitalising UK-Latin America Engagement Post-Brexit’ published by the British Foreign Policy Group in 2018, and has provided comment to various international media outlets.

Olivia Saunders is Senior Lecturer and Programme Leader in History at Liverpool John Moores University. Her research has been published in The International History Review and the Journal of Global History, and will appear in a forthcoming compendium on U.S. foreign relations. She is currently working on her first monograph, which examines the relationship between Britain, the United States, and revolutionary Bolivia in global perspective, c. 1946-1970.