His Excellency Orville London, High Commissioner for the Republic of Trinidad and Tobago 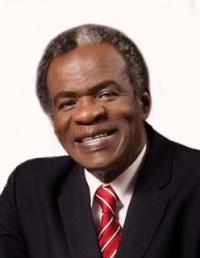 His Excellency Orville London was born in the village of Parlatuvier in Tobago, the smaller of the two islands in the twin island state of Trinidad and Tobago.  He obtained his primary school education at the Whim Anglican Primary School, and secondary education at Bishop’s High School in Mt. Marie, Scarborough. After graduation, he pursued an undergraduate degree at the University of the West Indies (UWI), St. Augustine Campus, graduating with Honours in History and Sociology.

He then embarked upon a teaching career, which spanned twenty-three years, climaxing with a six-year stint as Principal of the Signal Hill Senior Comprehensive School. He also taught International Relations at various secondary schools throughout Tobago, and lectured at the UWI School of Continuing Studies, Tobago Campus, after successfully completing postgraduate studies in Education and International Relations at his alma mater, UWI St. Augustine.

He has always been passionate about sports and has held key positions in the Tobago Football, Cricket, and Lawn Tennis Associations over the years. His wide interests also extend to journalism, and as a past Sports Editor of the Tobago News, he was able to marry these two passions in one career.

His Excellency assumed office as the High Commissioner for the Republic of Trinidad and Tobago to the United Kingdom on May 19, 2017.  He is also accredited as non-resident Ambassador to the Federal Republic of Germany, the Republic of Finland and the Kingdoms of Norway, Sweden and Denmark.