Vitalism, Technology, and the Making of a Continent 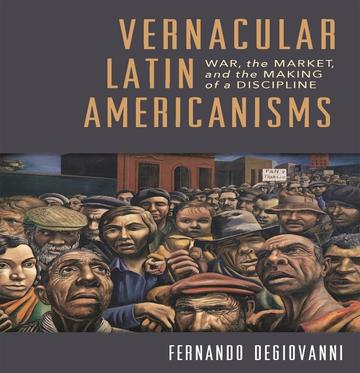 Fernando Degiovanni is Professor and Chair of the PhD Program in Latin American, Iberian, and Latino Cultures at The Graduate Center, CUNY.  He is the author of Los textos de la patria: Nacionalismo, políticas culturales y canon en Argentina (Beatriz Viterbo Editora, 2007) and Vernacular Latin Americanisms: War, the Market, and the Making of a Discipline (University of Pittsburgh Press, 2018), a book that explores the competing agendas that shaped the emergence of Latin Americanism as a field of critical debate and scholarly inquiry between the 1890s and the 1960s. He has also edited Comunidades y relatos del libro en América Latina (Orbis Tertius, 2015) and Latin American Literature in Transition, 1870-1930 (Cambridge University Press, 2021). His articles have appeared in numerous journals, including Revista Iberoamericana, Revista de Crítica Literaria Latinoamericana, Journal of Latin American Cultural Studies, Variaciones Borges, Hispamérica, and Cuadernos Hispanoamericanos, as well as in major reference works such as A Companion to Latin American Literature and Culture, edited by Sara Castro-Klaren, Historia crítica de la literatura argentina, edited by Noé Jitrik, and The Routledge Companion to Latin American Literary and Cultural Forms, edited by Mariano Siskind and Guillermina De Ferrari. In 2010, he was awarded the Alfredo Roggiano Prize for Latin American Cultural and Literary Criticism by the International Institute for Ibero-American Literature (IILI), and in 2019 he received the LASA’s Southern Cone Section Award for Best Book in the Humanities.

Hilda Sabato completed her BA in History at the University of  Buenos Aires (UBA) and her PhD at the University of London.  She is head-researcher of CONICET at the Program PEHESA of the Instituto Ravignani-UBA and was formerly History professor at the Facultad de Filosofía y Letras-UBA (1984-2013). She was vice-president of the International Committee of Historical Sciences (ICHS/CISH) from 2010 to 2015, and has been fellow and visiting professor in various academic institutions around the world. In 2012, she was awarded the Alexander von Humboldt prize for her research trajectory. Her latest book Republics of the New World. The Revolutionary Political Experiment in Nineteenth Century Latin America was published in 2018 by Princeton University Press.

Philip Williams is Dean of the College of Liberal Arts at California Polytechnic State University, San Luis Obispo. He previously served as Director of the Center for Latin American Studies and Professor of Political Science at the University of Florida. Williams received his M.Phil in Latin American Studies and D.Phil in Politics from the University of Oxford in 1987. He is co-author of Living "Illegal": The Human Face of Unauthorized Immigration (The New Press, 2011), Militarization and Demilitarization in El Salvador's Transition to Democracy (University of Pittsburgh 1997), author of The Catholic Church and Politics in Nicaragua and Costa Rica (Macmillan 1989), and co-editor of A Place to Be: Brazilian, Guatemalan, and Mexican Immigrants in Florida’s New Destinations (Rutgers University Press, 2009) and Christianity, Globalization, and Social Change in the Americas (Rutgers University 2001). His scholarly work has appeared in numerous edited volumes and journals such as Comparative Politics, Journal of Latin American Studies, Latin American Research Review, Journal of Interamerican Studies and World Affairs, Latin American Perspectives, Latino Studies, Journal for the Scientific Study of Religion, and Journal of Church and State.  Williams has received a number of prestigious fellowships and grants from the Carnegie Corporation of New York, the Ford Foundation, Fulbright, North-South Center, the Pew Charitable Trusts, the Rockefeller Foundation, the United States Institute of Peace, the United States Embassy – Panama, and the United States Agency for International Development.