This seminar will take place through Microsoft Teams. If you wish to join us, please contact administrator@lac.ox.ac.uk with your email address so we can register you in our Teams platform. Registration will be open until 12.00 noon on 8 May. 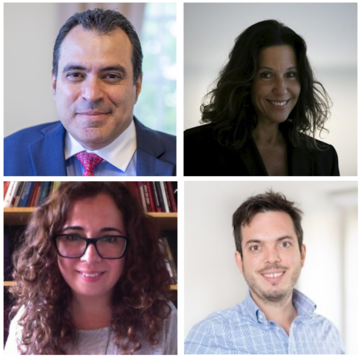 Kevin Casas-Zamora is the Secretary-General of International IDEA, since 1 August 2019.  Previously, he was Costa Rica’s Second Vice President and Minister of National Planning; Secretary for Political Affairs at the Organization of American States; Senior Fellow at the Brookings Institution; and National Coordinator of the United Nations Development Program’s Human Development Report and Senior Fellow at the Inter-American Dialogue, a Washington, DC-based policy research centre.  He has taught at Georgetown University, George Washington University, and the University of Texas at Dallas, among many higher education institutions. He holds a Law degree from the University of Costa Rica, a Masters in Government from the University of Essex, and a PhD in Political Science from the University of Oxford. He has authored several studies on campaign finance, elections, democratization, citizen security and civil-military relations in Latin America. His doctoral thesis, entitled “Paying for Democracy in Latin America: Political Finance and State Subsidies for Parties in Costa Rica and Uruguay”, won the 2004 Jean Blondel PhD Prize of the European Consortium for Political Research (ECPR) and was published in 2005 by the ECPR.

Daniela Campello is an Associate Professor of Politics and International Relations at the Getúlio Vargas Foundation, in Brazil. In 2018 she was Oxford-CAF Visiting Fellow at the Latin American Center, at Oxford. Campello received her Ph.D. in Political Science from UCLA and was formerly an Assistant Professor at Princeton University. Her research lies at the frontier of international and comparative political economy, with a particular focus on the consequences of globalization to democracy and redistribution in emerging economies. Prior to entering academic life, Campello worked as a business consultant in Accenture, as a sell-side financial analyst at Banco Pactual, and also for the Rio de Janeiro state government, where she managed projects funded by international financial institutions. Campello's work appears in top political science journals; she is the author of The Politics of Market Discipline in Latin America  (Cambridge University Press, 2015), and co-author of “The Volatility Curse”, forthcoming at CUP in 2020.

Ezequiel González Ocantos is Associate Professor in the Qualitative Study of Comparative Political Institutions in the Department of Politics and International Relations, and a Professorial Fellow of Nuffield College. In 2018 he received the Philip Leverhulme Prize in Politics and International Relations.  His primary research agenda is in the field of comparative judicial politics, with a regional focus on Latin America. He is the author of Shifting Legal Visions: Judicial Change and Human Rights Trials in Latin America (Cambridge University Press, 2016) which won the Herman Pritchett Best Book Award from APSA's Law and Courts Section; the best book award from ISA's Human Rights Section; and the Donna Lee Van Cott Best Book Award from LASA's Political Institutions Section. A second, shorter book on a similar topic, The Politics of Transitional Justice in Latin America: Power, Norms and Capability Building, was published in January 2020 by Cambridge University Press.