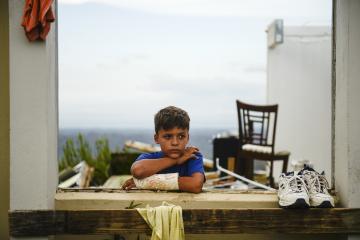 On Wednesday 20 September 2017 the lives of Puerto Ricans on the island and abroad changed forever. Hurricane María hit Puerto Rico as a category four storm (sustained winds of 150mph), leaving the Island in a state of emergency. Essential services such as power, potable water and communication services collapsed. Flooding did not discriminate between marginalized and affluent neighborhoods. But the natural disaster uncovered the soaring levels of inequality and the commodification of disaster-related recovery for Puerto Rican residents. Access to power, adequate food, potable water, among other aspects of life were guaranteed to individuals with access to the market. The wellbeing of the rest of the population rested in the hands of the federal emergency management agencies, and local citizen-led initiatives. Moreover, austerity programmes, a long-term lack of investment in infrastructure and the lack of decision-making power from Puerto Rico´s elected officials magnified Hurricane Maria’s socio-economic impact. .

The main purpose of this roundtable will be to address the disaster conditions, response and consequences of Puerto Rico’s Not-So-Natural Disaster. The conversation will start with a brief overview of the infrastructural collapse and the challenges to rebuilding and reconstructing society (e.g., rapid out-migration, mass unemployment). The discussion will address the following issues:

Patria, currently a Senior Lecturer in Media & Creative Industries at Loughborough University, first arrived in the UK in 1992 to study at University of Leicester where she obtained her PhD in 1996. Her early childhood was marked by her experience of growing up between the rural town of Moca in Puero Rico and the Latin neighbourhoods of NY, Chicago and Philadelphia. This experience has informed her research with Latin Americans in London and she has built on this to found and direct Latin Elephant, a Charity working to increase participation of migrant and ethnic groups, in particular Latin Americans, in processes of urban change in London. She is the author of The making of Latin London: Music, place & identity (1999) and of numerous articles about urban regeneration and Latin Americans in Elephant and Castle.

Melissa, born and raised in San Juan Puerto Rico, is a Lecturer in Urban Futures at Lancaster University's Sociology Department. Following her BA in Tufts University, she obtained an MSc in International Development and Gender and a PhD in Sociology from the LSE. In between, she worked in international human rights organisations in London, Washington D.C. and Puerto Rico. Melissa's doctoral research focused on the activism surrounding the demolition of one of the last high rise public housing projects in the financial district of Hato Rey, Puerto Rico. She has continued to pursue work on the 'making and unmaking' of homes in other international contexts, including Rio de Janeiro, London, and South Asia, which has led to a number of articles and the co-edited books 'Social Housing in Europe' (Wiley, 2014) and Geographies of Forced Evictions (Palgrave, 2017).

Janialy is a native Puerto Rican social anthropologist currently residing in Cambridge, UK.  Following her BA and MA in Anthropology at the University of Puerto Rico and the University of Toronto respectively, she moved to Barcelona, Spain, to further her studies in the discipline. At the University of Barcelona she obtained a MA in Visual Anthropology, a MA in Anthropology and Ethnography and recently, her PhD in Society and Culture.  Her doctoral research examined how a governmental community development project collided with local notions of wellbeing, progress, and conflict solving methods in an impoverished neighbourhood of Puerto Rico. Janialy has collaborated in ethnographic films and in various projects on social sustainability, moral economies, and civic responsibility.  She is also passionate about expanding fieldwork insights into a more public-democratic platform, using visual and creative writing forms.

Gibrán is a Postdoctoral Research Fellow at the Department of Global Development and Planning, University of Agder (Norway). After finishing his undergraduate studies in his native Puerto Rico he moved to Madrid to pursue a Master and PhD in Political Science at the Complutense University. His research focuses on the development of emerging welfare states in Latin America and the Caribbean, and its relationship to multidimensional poverty and inequality. Gibran is also interested in the role of organised communities in Puerto Rico as alternative welfare providers. A book on the latter entitled ‘Produciendo Bienestar’ was recently published in Spain (Dykinson, 2017).