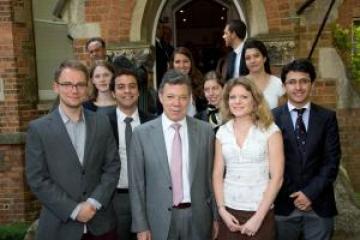 The Latin American Centre of Oxford University welcomes President Juan Manuel Santos and his wife María Clemencia Rodríguez de Santos, at the first ever Colombia’s state visit to the UK.

President Santos, who was awarded the Nobel Peace Prize for his resilient efforts to achieve peace in his country, will start his visit this Tuesday 2 November, when he will receive a ceremonial welcome from the Queen and the Duke of Edinburgh at the Royal Pavilion on Horse Guards Parade, attended also by the Primer Minister, the Foreign Secretary and the Home Secretary.  Other activities during his visit include a working lunch with the Prime Minister at 10 Downing Street, a State Dinner at Buckingham Palace, visits to the Natural History Museum and Belfast, and a lecture at LSE, where he studied.

In 2013, President Santos visited Oxford to launch the Multidimensional Poverty Peer Network (MPPN) – a ‘South-South network of countries developing, using, or exploring multidimensional poverty measures to energise the fight against poverty using the Alkire Foster methodology developed at Oxford Poverty and Human Development Initiative’.  On that occasion, President Santos also visited the Latin American Centre, where he was welcomed by the Warden of St. Antony’s College, Professor Margaret McMillan.