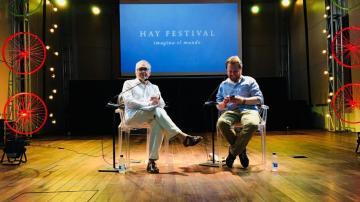 The Colombian novelist Juan Esteban Constain discussed with Eduardo Posada-Carbó his new book of essays, La novela como historia (Taurus, 2018), at the Hay Festival in Cartagena de Indias on 25 January earlier this year. The conversation focused on the relationship between the historical discipline and the novel, particularly around the work of the Colombian laurate Gabriel García Márquez. At another event of the Hay Festival in Cartagena, in the Museum Rafael Núñez, Posada-Carbó, Professor of the History and Politics of Latin America at the LAC, talked with the Colombian journalist Daniel Samper Pizano to discuss Samper Pizano’s new book, Camas y Famas.