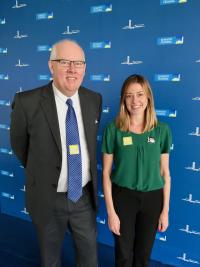 The BLS was launched by Power in 1990, during Brazil’s first democratically elected legislature, and has been replicated every four years since then. Survey questions cover ideology, public policy, political reform and international relations.

Since its inception, the BLS has received 1145 survey responses from 890 different Brazilian politicians of all persuasions.

Pictured at the Federal Senate on 19 April 2017: Timothy Power and Nathália Passarinho (Wolfson College), an MSc candidate at the LAC who is coordinating fieldwork in Brasília.