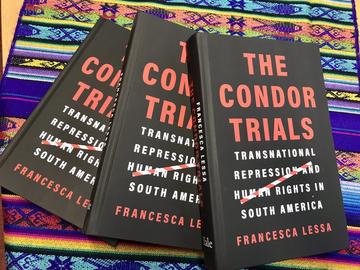 On May 31, the second book by Departmental Lecturer Dr Francesca Lessa will be released by Yale University Press in the United States; the UK release date is scheduled for July 26. The monograph is the main output of Dr Lessa’s ongoing research project on Operation Condor and accountability for transnational crimes in South America, which began in 2013.

Through the voices of survivors and witnesses, human rights activists, judicial actors, journalists, and historians, in her newest book, Francesca Lessa unravels the secrets of transnational repression masterminded by South American dictators between 1969 and 1981. Under Operation Condor, their violent and oppressive regimes kidnapped, tortured, and murdered hundreds of exiles, or forcibly returned them to the countries from which they had fled. South America became a zone of terror for those who were targeted, and of impunity for those who perpetuated the violence. Lessa shows how networks of justice seekers gradually materialized and effectively transcended national borders to achieve justice for the victims of these horrors. Based on extensive fieldwork, archival research, trial ethnography, and over one-hundred interviews, The Condor Trials explores South America’s past and present and sheds light on ongoing struggles for justice as its societies come to terms with the unparalleled atrocities of their not-so-distant pasts.

Brian Loveman, San Diego University, praised the monograph saying that “no other book combines a decade of research on Operation Condor and transnational repression by the South American military regimes with synthesis of the literature on efforts to achieve accountability for human rights violations and analysis of the prosecutions in Argentina, Chile, Uruguay, and Italy.” Likewise, Jo-Marie Burt, George Mason University, noted how the book “breaks important new ground in our understanding of complex justice processes for grave human rights violations” and that “Lessa's analysis of ‘justice seekers’ highlights the central role of victims in transitional and transnational justice processes.” Lastly, John Dinges, author of Hunting Enemies Abroad, affirmed that “Lessa’s exploration of transnational repression in 1970s’ South America could not be more current in these days of resurgent authoritarianism” and that “her analysis of the Condor period is groundbreaking and documents both the human rights crimes and the efforts of international ‘justice seekers’ to breach— eventually-- the dictatorships’ impunity.”

Lessa’s award-winning research on Operation Condor has been funded, amongst others, by the European Commission under Horizon 2020, the University of Oxford’s John Fell Fund and the ESRC Impact Acceleration Account, The British Academy & Leverhulme Trust, and the Open Society Foundations.