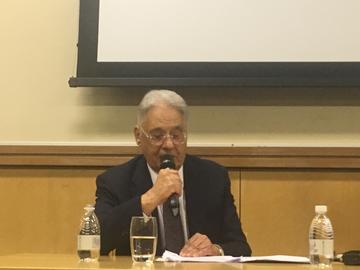 ‘Challenges and risks to democracy’ was the topic of the Lecture delivered by the former President of Brazil, Fernando Henrique Cardoso, on Tuesday, 26th November, at the launching of the Global Forum convened by the Oxford School of Global and Area Studies, OSGA.  Former President Cardoso’s Lecture also served as the Keynote Lecture of a one day conference organised to mark the 50th anniversary of his book with Enzo Faletto, Dependencia y desarrollo en Latinoamérica, first published in Spanish in 1969.  The conference counted on contributions from a group of scholars based in the US, Germany and Oxford: Margarita Fajardo, Valpy Fitzgerald, Andrés Guiot Isaac, Clara I. Ruvituso, Alessandro Iandolo, Andrew Roberts, Matthew McCartney, Andy Hurrell and Laurence Whitehead.  Former President Cardoso was introduced by the Chancellor of the University, Lord Patten at the Nissan Lecture Theatre in St Antony’s College, where the event took place.