Dr Lessa presents her research on Operation Condor in the US 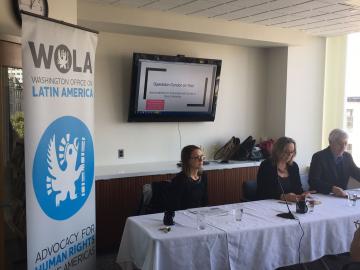 Subsequently, on April 10 and 12, she presented her research on Operation Condor at the Washington Office on Latin America and the Inter-American Commission on Human Rights. She discussed preliminary findings on a new database on victims of transnational human rights crimes during state terror in South America in the 1970s and 1980s. Finally, she outlined 26 criminal proceedings across Argentina, Chile, Uruguay, Italy and the USA that investigated Operation Condor atrocities over time.