REES will host a new project exploring political homophobia and lesbian, gay, bisexual, and transgender – LGBT - communities in the countries of the former Soviet Union. ‘Between Russia and Europe: Homophobic Politics and LGBT Activism in Eurasia’ will bring together global scholars and activists from the former Soviet Union to discuss in comparative and transnational perspectives the historical origins, and contemporary politics of homophobia in the region.

The Russian gay propaganda law, adopted in 2013, and the Kremlin’s sponsorship of official homophobia excited worldwide controversy during the run-up to the Sochi 2014 Winter Olympics. Yet research on official homophobia, popular attitudes, and LGBT responses in Russia and the countries of the former Soviet Union remains basic, with little attempt to compare experience across borders, or draw on lessons from other global regions.

‘Between Russia and Europe: Homophobic Politics and LGBT Activism in Eurasia’ will begin to map political homophobia across Eurasia using insights from scholarship on the history of homophobia, queer theory, post-colonialism and post-socialism studies, and studies of contemporary anti-LGBT politics in other global contexts.

Critical for the project will be the voices of LGBT activists. We will bring to Oxford queer leaders from the region to report on the status of LGBT citizens in their home countries. From LGBT activists in the countries of the former Soviet Union, we will seek reports about community-building through work to write the LGBT histories of their countries and regions before, during, and after communism.

We will also be seeking scholarly work on the Orthodox Churches and other religious confessions, especially Islam, in the region, and their views on homosexuality and gender dissent. We lack detailed histories for the modern period of how Imperial, Soviet, and post-Soviet religious institutions in the region thought about what are now called LGBT issues; this project will take stock of what is known and what work still needs to be done.

This project is financially supported by the John Fell Fund, University of Oxford.

Calls for papers will be issued over the next nine to twelve months. For further details contact Professor Dan Healey: dan.healey@sant.ox.ac.uk or Twitter: @dan_healey 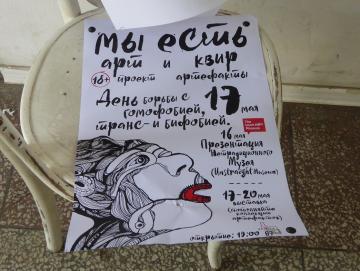