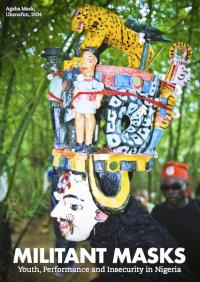 The focus of my contemporary work has been to study the politics and performance of youth as a marginal category in the context of post-1999 democracy and insecurity, and has explored the politically ambiguous social mechanisms through which young people articulate claims and rights and engage with the postcolonial state.

This research has focused on the persistence of secret initiatory cults in the mobilization of young men and the coding of youth as a political category in the emergence of a new cult known as Agaba.

This project narrates the historical trajectory of the agaba masquerade as it has been adopted and adapted by youth across the Niger Delta region since the Civil War (1967-70). Banned in the 1980s it occupies an ambivalent space today – at moments it is a key part of civic celebrations such as Independence Day, and is a feature of popular culture in its ‘gyration’ music. In other moments it is linked to drugs’ trafficking, shadow political networks and militant violence The research explores how the mask slips from an ethnic designation to a generational one, how the mask’s history indexes the violent contours of the Nigerian petro-state, and how the mask moves across artistic registers in literature, music and art. 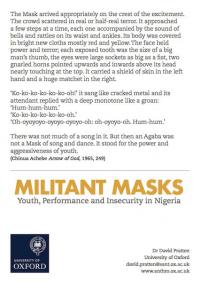 Along the way agaba encounters Chinua Achebe and James Bond, an Oscar-winning documentary and the latest videos of Flavour; agaba meets the highlife music of Rex Lawson and the hip hop of Notorious BIG, and is carried by champion boxers and militant warlords. Its trajectory plays across an arresting audio-visual history and is itself a constantly changing and improvised form.

This project, based on research in based in Ukanafun LGA, Akwa Ibom State, and in the cities of Calabar and Port Harcourt, narrates a story that gets behind the stereotypes of violence in the Niger Delta and explores creativity, cultural exchanges, and political critique. While the performances and aesthetics of the masquerade are bold and striking, the songs that are rehearsed, often in pidgin English, are witty, laconic laments that reflect on the insecurity of life for marginal young men the oil-producing region, and offer a profound political critique of the Nigerian political economy.

The group, Area United, brought together rival factions in the Main Town area of the city that had developed after ‘007’ split from ‘50/50’ in the 1970s. Area United performs on Independence Day, at Christmas, carnivals, and at burials (as here). It often performs to celebrate ‘big men’ in the city too, the group’s ‘grand patron’ is the former militant leader of the Niger Delta Vigilante, Chief Ateke Tom.

Ukanafun is a rural Local Government Area several hours’ drive from the oil city of Port Harcourt. Young men returned from the city to launch the masquerade in the late 1990s. Many left the city as urban cult groups were banned following the 2003 electoral violence. In 2005 attempts were made to ban agaba in these villages following an attack on the police station. Nevertheless, agaba continues to galvanise local youth.

The music of the agaba masquerade is traditionally associated with the metal gong (ogele) but is drawn from a range of sources – palm-wine drinking, church hymns, the highlife of Rex Lawson, and prison work songs. Singing in pidgin English means the play has accommodated urban youth and has developed a commercial pop music genre known as gyration. In recent years Agaba can be found performing in the music videos of leading artists, the Royal Boyz, Flavor and Harrysong.

After the Nigerian Civil War, the Agaba masquerade in Calabar was led by a group of boxers and weightlifters from the poorer neighbourhoods of the south of the city.  Youth unemployment in the city during the 1980s was known as the ‘Agaba syndrome’, and after clashes with the police there were attempts to ban the Agaba masquerade. In recent years the Agaba groups have been associated with drugs and political violence.

Masquerades represent local communities at New Year celebrations. As the traditional village masquerades have declined in the face of opposition from the churches, the ‘Base Boys’ have assumed a ‘traditional’ status. Here they perform as elders, dressed in wrappers, singlets and red, white and black bobble hats. The wooden flute (oja) provides agaba’s distinctive music.

What’s in a mask? Are masks people in disguise or spirits taking physical form? For young men living with everyday insecurity accessing hidden histories and sources of strength can be empowering and protective. Many rules exist to protect the mask’s identity – this photograph was taken with special permission after a day’s performance at a burial and shows the mask wearer in a state of exhaustion.

Funding for this project
Related activities under this programme

In April 2018, working with members of Area United agaba group and local carver, Tonye Agala and his apprentices, a new Agaba or Mgbedike mask was carved as part of this project.

The wood for the carving is known as Golden or agwu wood, (alstonia boonei) and was sourced from Timber market. The mask design was conceived by Elder Tamuno Amboy Amabeoku and was based on an older mgbedike (time of the strong) mask design.

The British Academy Summer Showcase - billed as ‘a free festival of ideas for curious minds’ – was a free, public event that took place for the first time over two days and one evening in June 2018. The Showcase was attended by 1700 visitors and presented 15 exhibits from current and recent British Academy award holders, including Militant Masks.