Policy of the Central Powers (Germany, Ottoman Empire, Austria-Hungary, Bulgaria) in the Caucasus in 1918

After the Treaty of Brest-Litovsk in March 2018 the Central Powers got directly involved in the matters of South Caucasus which proclaimed independence from Russia in the aftermath of the Bolshevik Coup. The war allies – Ottoman Empire and Germany competed each other to get an upper hand in the control of this land-bridge between Europe and Asia, while Austria-Hungary had also some economic interests in the region.

The government of Young Turks had a hope to establish a direct contacts with Turkish-speaking peoples of central Asia through the Caucasus, thus creating a new Turkish Empire. Germany did not agree to some ultimate purposes of their Turkish allies and aimed to win the Caucasus for themselves and strengthen the war economy through Baku oil and Georgian manganese at home and at the same time to get an access to central Asia, Afghanistan, and India and rage a war against Great Britain there. The peoples of Caucasus were divided in their interests as Georgians sought to reestablish their independence through the German sponsorship, while the Tartars of Azerbaijan were inspired by the ideas of their Muslim Ottoman ally. 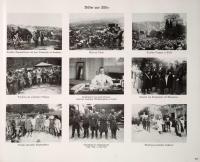