The Emergence of the Indian and Chinese Economic Powerhouses: Historical and Institutional Perspectives 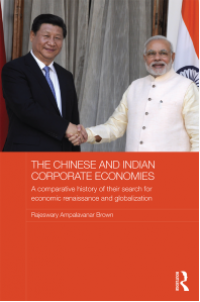 This comparison of China and India asks the big question: How is it that after centuries of  “alleged”  underdevelopment, China and now India are emerging powerfully and pulling ahead of the Western economies? The theoretical context here is the debate on  Great Divergence promoted by Ken Pomeranz and critically opposed by David Faure and a host of  other Sinologists. Pomeranz in his famous treatise The Great Divergence (2000) believed that prior to Britain’s industrial revolution both China and Europe revealed little difference in economic structure or per capita income and only cheap coal and imperialism and access to land intensive production provided a leap. In her  earlier book on Islamic Philanthropy  in Thailand,  Raj Brown argued that in fact Southern Thailand, a resource rich area, revealed a vibrant form of ethical Islamic capitalism while its handicap was Western multinationals such as BP and their associational links to powerful Thai elites in Bangkok. In an earlier article she has argued that Islamic Endowments and the Land Economy in Singapore were the genesis of an ethical capitalism on the Island and has embedded itself in contemporary capitalist initiatives.

With these Asian Powerhouses of India and China,  Raj Brown, inspired by  Douglass North, focuses on the economic institutions and in particular the institution of law  to understand this diversity in economic growth between both India and China.

Raj Brown is Emeritus Professor in International Business at Royal Holloway College. Her publications include The Chinese and Indian Corporate Economies: A Comparative History of their Search for Economic Renaissance and Globalization (2017); Islamin Modern Thailand: Faith, Philanthropy and Politics (2013); The Rise of the Corporate Economy in South East Asia (2006); Chinese Big Business and the Wealth of Asian Nations (2000); and Capital and Entrepreneurship in South East Asia (1994).