The Book of Swindles: Selections from a Late Ming Collection 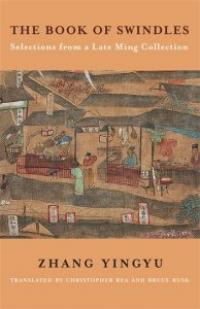 This is an age of deception. Con men ply the roadways. Bogus alchemists pretend to turn one piece of silver into three. Devious nuns entice young women into adultery. Sorcerers use charmed talismans for mind control and murder. A pair of dubious monks extorts money from a powerful official and then spends it on whoring. A rich student tries to bribe the chief examiner, only to hand his money to an imposter. A eunuch kidnaps boys and consumes their ‘essence’ in an attempt to regrow his penis. These are just a few of the entertaining and surprising tales to be found in this seventeenth-century work, said to be the earliest Chinese collection of swindle stories. The Book of Swindles, compiled by an obscure writer from southern China, presents a fascinating tableau of criminal ingenuity. The flourishing economy of the late Ming period created overnight fortunes for merchants — and gave rise to a host of smooth operators, charlatans, forgers, and imposters seeking to siphon off some of the new wealth. The Book of Swindles, which was ostensibly written as a manual for self-protection in this shifting and unstable world, also offers an expert guide to the art of deception. Each story comes with commentary by the author, Zhang Yingyu, who expounds a moral lesson while also speaking as a connoisseur of the swindle. This volume, which contains annotated translations of just over half of the eighty-odd stories in Zhang’s original collection, provides a wealth of detail on social life during the late Ming and offers words of warning for a world in peril.