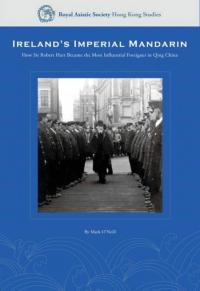 Sir Robert Hart served as Inspector-General of the Imperial Maritime Customs Service of the Qing dynasty from 1863 until his death in 1911. No foreigner has ever had or will ever have the life he did in China. He provided the government with more than 20 per cent of its annual revenue, set up the Chinese Post Office, founded a system of lighthouses along the coast, bought British warships that were the foundation of the modern Chinese navy and negotiated a peace treaty to end the Sino-French war of 1884-85. He was a trusted confidant of government leaders who constantly sought his advice in how to deal with aggressive and meddling foreigners. His finest hour came in the Boxer Rebellion of 1900. With 1,300 other foreigners and 3,100 Chinese, he was trapped in the Legation Quarter of Beijing for 55 days, ready for death. After the siege, many called for partition of China or imposition of a new dynasty – but Hart argued that the fault for the rebellion lay with the foreigners.

Mark O’Neill has worked in Asia since 1978, in Hong Kong, Taiwan, India, China and Japan, for the BBC, Reuters, the South China Morning Post and other media.  He now works as an author, journalist and teacher in Hong Kong. He has written seven books: Tzu Chi – Serving with Compassion; Frederick, the Life of my Missionary Grandfather in Manchuria; The Chinese Labour Corps; From the Tsar’s Railway to the Red Army; The Second Tang Dynasty – the 12 Sons of Fragrant Mountain who Changed China; The Miraculous History of China’s Two Palace Museums, and, most recently, Ireland’s Imperial Mandarin: How Sir Robert Hart became the most Influential Foreigner in Qing China (2017).

IF YOU WOULD LIKE TO SEE THE BOOK BEFOREHAND, PLEASE SEE CLARE ORCHARD