Julius Caesar, whose premiere was held on the Grand Stage of Rustaveli Theatre of Tbilisi on 1 June 2015, is the last production of ‘Sturua’s Shakespearean world’. Sturua’s interpretation of Shakespeare’s Julius Caesar is based on the artistic and conceptual understanding of postmodern aesthetics, and, as a result of analysing metaphors and symbols, he shows the themes and problems, which represent the main idea of Shakespeare’s play and of the performance. Shakespeare’s metaphor ‘All the world’s a stage’ used in the production expresses not only the contemporary local and global reality but also the biblical, fictitious and theatrical reality depicted by means of intertextuality and the artistic technique of metatheatre. Considering this, the author of the paper will discuss several issues: 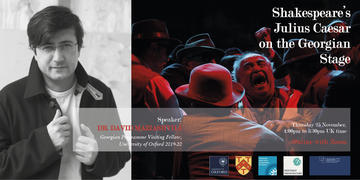 Dr. David Maziashvili is a literary scholar by training and is interested in Shakespeare’s works, especially in the way his works are interpreted in contemporary literature and theatre. In this regard, the Georgian director Robert Sturua’s contribution to the global history of staging and interpreting Shakespeare is special, and we can easily say that he created a world that we can call “Sturua’s world of Shakespeare”. Researchers and scholars want to know how Shakespeare’s texts are staged and how contemporary creators and contemporary thinkers understand the problems raised in his Julius Caesar. This documentary is Dr Maziashvili's attempt to show these processes at work.

Julius Caesar Fragments. So, I didn’t stage the entire play – just the final 10-minute scene following Caesar’s murder. This in itself is a novelty of sorts because in the play, there is this typical idea, one that is fully incorporated into American films these days, that if a man commits some crime, a murder, God will definitely punish him. A criminal protagonist never wins in American cinema. The action takes place in Chicago, during that cutthroat gangster period. I touch on that in the play. I compare politics to mafia structures. David filmed rehearsals and you, too, will see what the work of actors and a director is, …[Documentary] is, indeed, a genre, the theatre itself needs it, and we need it to see our own work through someone else’s eyes.

Please register for this event here.