Christian thought in motion: the rise of the Christian Arabic literature and its dissemination in Georgian world

Presented on the basis of manuscripts of Bodleian Libraries 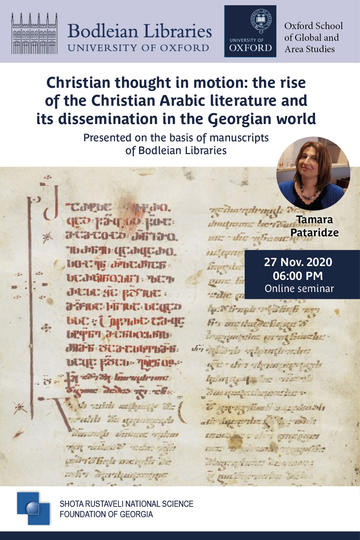 My research focuses on explaining the mechanisms through which four linguistic communities (Greek, Syriac, Arabic and Georgian) collaborated in the Melkite monastic centres (Mar Saba, St Catherine on Sinai) to create the corpus of Christian Arabic literature (CAL) in face of expanding Islam in the Holy Land from the 8th to the 10th century. Literary exchanges of the texts and ideas developed between these linguistic communities provided an exceptionally efficient circuit for cross-cultural  transfers. It also shaped the profile of the CAL emerging on the basis of this collaborative literary background. I therefore see CAL as a community-based project promoted by Christians to face the challenges caused by ongoing expansion of Islam. In this perspective its creation appears as a project of high societal magnitude aiming to optimise the Christian-Muslim encounter.

The societal impact of the early CAL (8th - 10th cent.) was, among others, demonstrated by the wide range of translations carried out from Arabic into Georgian. The content of these translations shows that Georgian translators had been precisely attracted with the Christian Arabic texts considered more relevant in handling the new geopolitical situation in the region of the Holy Land overwhelmed by Islam. Ongoing accents and insights of CAL would have been appealing for Georgian Christians too, as they were crucial for all the other Christian communities in their way of mobilization.

Taking this into consideration, I will discuss how the newly born CAL was spread far beyond the Holy Land to Caucasus and been appropriated by Georgian community. The study of this topic is a major desiderata in scholarship. Indeed, due to the scarcity of the researches on the topic, the existing recent studies do not dully account for the important data preserved by Palestino-Sinaitic translations carried out from Arabic into Georgian. To address this issue my current research project in the Bodleian Libraries aims to study an important witness of the Wardrop collection: Ms. Georg.b.I.  This manuscript is copied in the Holy Land (1050 AD), in  Georgian monastery of the Holy Cross and contains important collection of the Lives and Martyrdoms of Palestinian Saints and the accounts related to the history of the Holy Land Christianity, in many cases, translated from Arabic into Georgian.

Dr Tamara Pataridze gained her PhD in Oriental Studies (Oriental Languages and Literatures) from the University of Louvain (Louvain-La-Neuve, Belgium) in 2012. Her research interest focuses on the study of the circulation of the texts and ideas between the Greek, Syriac, Christian Arabic and Georgian manuscripts from Holy Land region. Prior to working in Oxford on the collection of oriental manuscripts of Bodleian Library, she conducted her research in multiple countries and research institutions. She was F.N.R.S researcher at the Centre for Oriental Studies of the University of Louvain (Louvain-La-Neuve), postdoctoral fellow at the Institute for the Advanced Study & Center for Eastern Mediterranean Studies of CEU (Budapest) and the Center for the Study of Christianity of Hebrew University of Jerusalem (Jerusalem). She has contributed to international research projects, such as Comparative Oriental Manuscript Studies [COMST] (Universität Hambourg), The Caucaus in Context, 300-1600 (CEU), GREgORI (UCLouvain), Manumed (Euromed Heritage IV, European Union) and others. She has authored several publications on the issues of cultural and literary connections between the different Christian communities of the Middle-East, on the oriental manuscript collections and Palestino-Sinaitic monastic centres. She has also publications in the field of Digital Philology.