Friday 5 May, 6:00pm
The Old Library, All Souls College 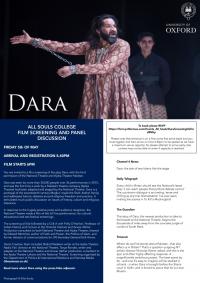 You are invited to a free film screening of the play Dara in Oxford at All Souls College, The Old Library  May 5th 6pm, with the kind permission of the National Theatre and Ajoka Theatre Pakistan. Dara was seen by more than 30,000 people over 36 live performances in London in 2015, the first time a work by a Pakistani theatre company (Ajoka Theatre) had been adapted and staged by the National Theatre.  The audiences included many from Britain’s Asian communities. Dara is a portrayal of the seventeenth century Moghul Royals the Shah Jahan family and addresses historic debates around religious freedom and practice. Dara created much public debate on culture, history and religious tolerance. In response to the hugely positive audience and press response, the National Theatre, made a film of the full live performance of Dara, for cultural, educational and arts festival screenings.

The screening will be followed by a panel discussion and audience Q & A with Anwar Akhtar from Samosa Media project and Production consultant to National Theatre and Ajoka Theatre, Polly O'Hanlon: Professor of Indian History and Culture at the Oriental Institute, and moderated by  Edward Mortimer: author of Faith and Power: the Politics of Islam, and former Director of Communications for UN Secretary-General Kofi Annan.

Tickets for the screening can be booked on the links below.

Some media links on Dara are also below.

www.channel4.com/news/dara-mughal-india-pakistan-national-theatre-video - Dara: the tale of two Islams hits the stage –

Peter Tatchell - Daily Telegraph ‘every child in Britain should see the National's latest play: - it can reach people that political debate cannot’ The courtroom dialogue is as riveting, tense and chilling as any trial dramatisation I’ve ever seen; rivalling the scenes in To Kill a Mockingbird  http://eepurl.com/bgqyqr

The story of Dara, the newest production to take to the boards at the National Theatre, is one that begins thousands of miles away from the concrete jungle of London’s South Bank.

www.timeout.com/london/theatre/dara 'Where do we find stories about Pakistan… that also affect us in Britain? That’s a question outgoing NT artistic director Nicholas Hytner asked, and this is the epic and often highly affecting response. A magnificently ambitious project.. The best scene by far – and one it’s easy to imagine will be studied in schools – is when Dara is brought before the Sharia court in Delhi, and is forced to prove that he is a true Muslim'.

http://urbed.coop/news/dara-screening Manchester Dara Screening October 13th review –  On the 13th October 2016 URBED and The Samosa were delighted to put on a free screening of the play Dara at 70 Oxford Street Manchester (formally Cornerhouse).. we were pleased to see large numbers from South Asian communities, who are often under represented in the Manchester arts scene. Younger attendees included students from Manchester’s colleges and Universities who were excited to get the opportunity to see a National Theatre production without the high cost of ticket prices. The audience were completely engaged by the production, particularly during the tense trial scene, which elicited gasps and murmurings; It was easy to forget that the story was not unfolding live on stage.

I was excited about seeing a play about royal power politics played on an entirely different stage from The James Plays and the endless stream of Henries. But what I didn’t expect was to go see a play that was absolutely in the blazing heart of everything politically aware people are arguing about today. In the wake of Charlie Hebdo, Dara is a must-see show, presenting a 17th century tale of two competing visions of Islam that mirrors almost exactly the questions we are dealing with today.