The Colloquia feature leading figures, as well as younger scholars, from across the world. They present their research in papers on all kinds of music-related topics. Graduate students Jason Weir and Rosie McMahon organise the series. Presentations are followed by discussion and a drinks reception. Students, staff, and the general public are warmly encouraged to attend.

Migration, Memory and Music: Field Recordings from Bengal and the Diaspora

‘Bengal’ is an amorphous map, formed of many broken parts; it is also a place scattered in many places. In fact, geopolitically, there is no place any more which is called ‘Bengal’; there once was, but that was a time in the past. But there are place-names carrying echoes of that past. I come from such a place of changing names, made, un-made and re-made in the course of history; shaped by forces of nature; also through journeys of people into and out of it. I come from a place geographically located in the east of the Indian subcontinent, comprising Bangladesh and the Indian state of West Bengal (which is now likely to be renamed Bangla) and places sharing borders with Bangladesh and West Bengal, such as Assam and Meghalaya and Tripura. I also find myself moving through places carried by people in their hearts, from this fragmented geography, on voyages across difficult terrains and mighty oceans, to distant lands, such as Gurgaon in Haryana, India or the East End of London.

This is the ‘Bengal’ of this presentation, ‘Migration, Memory and Music’. It is a nameless place on the one hand, and a place with many names on the other. In the absence of one name, I have had to make one up; rather, return to an old one. The presentation, told through songs and stories recorded during travels across this whole space over many years – our own recordings and those of others, some kept in archives – will in fact try to sing a place into being. It will not be an attempt to return to some mythical past of harmonious cohabitation of a conflicted people, but will rather try to show time and place as being forever conflicted and fragmented. Name is but a shifting identity and that is true not only of Bengal but of most other places. What is Bengal? Where does its east end and where does its west begin?

Pegging itself on the changing map of Bengal, this presentation will attempt to talk about the cohabitation and collision of multiple times within every time, the existence of many places within each place, universalising the story of the migration, memory and music of the land of Bengal into a story about all storms and wars which break up places, dislocate people while also returning them to their dreams of home and homeland, about which they sing in their songs. Based on my project ‘The Travelling Archive: Field Recordings and Field Notes from Bengal’ (www.thetravellingarchive.org, which I share with sound recordist Sukanta Majumdar), I will try to present a story which I think is especially relevant today when we are fortressing our so-called homelands, guarding our territories, forcing people out while at the same time masses of people continue to move from one place to another, in fear, desperation and with hope.

Moushumi Bhowmik is a singer and writer now based in Kolkata, India but who has lived and worked in India, Bangladesh and the UK for over two decades. She combines her art practice with research, collaborates with artists across disciplines and in different countries, and she is currently writing her doctoral thesis on ‘Songs of Absence and Presence: Studying the Arnold Bake Wax Cylinder Recordings from Bengal, 1931-34’, at the School of Cultural Texts and Records of Jadavpur University, Kolkata, under the supervision of Professor Amlan Dasgupta. Moushumi is co-creator of The Travelling Archive, a project in field recording, which has been supported since 2003 by grants at home and abroad and by friends. The Travelling Archive have presented their work through exhibitions and films, while also running the label Travelling Archive Records. An LP of their work was released by Sublime Frequencies, Seattle, USA in 2013. Moushumi’s essays in Bangla and English have been included in several volumes on music and sound, including Lane, Cathy and Angus Carlyle (eds.), On Listening. (London and Sheffield: CRiSAP and RGAP, 2013) and Panjabi, Kavita (ed.), Poetics and Politics of Sufism and Bhakti in South Asia: Love, Loss and Liberation. (New Delhi: Orient Blackswan, 2011). 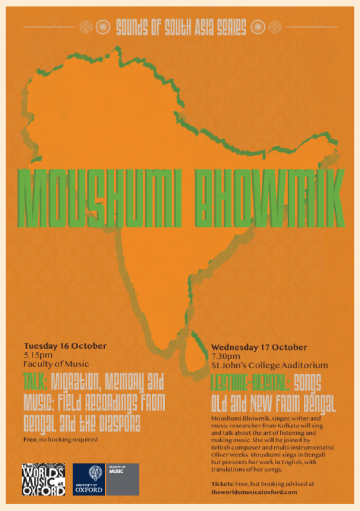