Michael Wood and Rebecca Dobbs on 'The Story of China: Turning Chinese History into Television' 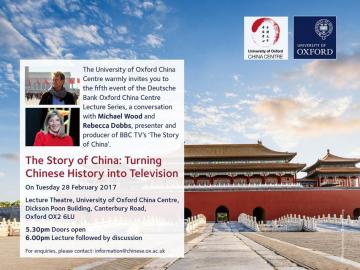 The talk will be preceded by a screening of one episode from the series, 4-5pm in the lecture theatre.

Michael Wood: For over thirty years now, historian and broadcaster Michael Wood has brought history alive for viewers and readers in Britain, the US and further afield. He is the author of several highly praised books on English history including In Search of the Dark Ages, Domesday, and In Search of England, and well over one hundred documentary films, among them In the Footsteps of Alexander the Great and The Story of India, which The Wall Street Journal described as ‘still the gold standard’ of documentary history making. The Independent newspaper called his Story of England, which told the tale of one village, Kibworth in Leicestershire, through British history, ‘the most innovative history series ever on TV’. His most recent TV work includes the series King Alfred and the Anglo-Saxons and Shakespeare’s Mother (2015); and The Story of China (2016) broadcast on BBC 2  and PBS.

Rebecca Dobbs: Producer/Director, Maya Vision International Ltd. Rebecca worked as a research psychologist and academic before founding Maya Vision and then immediately began working with David Bowie – two years later they had completed a cinema-length documentary covering his Southeast Asian tour. Rebecca and Maya Vision went on to work on a range of groundbreaking projects across the globe, telling powerful stories and bringing diverse peoples, places and stories to television audiences on every continent. Focusing often on issues close to her heart – social justice, feminism, LGBT and human rights, Rebecca has produced drama for cinema and TV, as well as arts, history, politics, music, current affairs and children’s programming. She has worked closely with historian Michael Wood on many award-winning projects, from In the Footsteps of Alexander the Great, to The Story of China, which she produced and directed. An occasional lecturer at the National Film and Television School – she has spoken at many International festivals, film schools and universities and currently sits on the board of The Shakespeare Birthplace Trust.