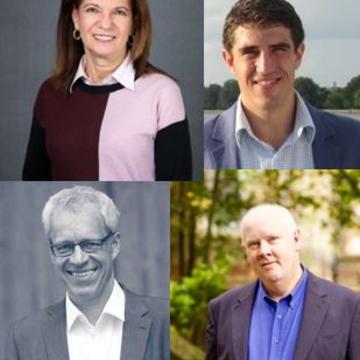 Please email paola.quevedogarzon@area.ox.ac.uk with your e-mail address so we can register you. The deadline to register is Tuesday 10 November  at 12 noon

Miriam Kornblith is Director for Latin America and the Caribbean at the National Endowment for Democracy in Washington, D.C. She has taught politics at the Central University of Venezuela, and from 1998 to 1999 served as a board member and vice-president of the Venezuelan National Electoral Council.

Tom Long is an Associate Professor in the Department of Politics and International Studies at the University of Warwick. He is also an Affiliated Professor at the Centro de Investigación y Docencia Económicas (CIDE) in Mexico City. During 2018, he was Fulbright visiting professor at the Instituto de Ciencia Política of the Pontificia Universidad Católica of Chile; he was previously on the faculties of the University of Reading and American University. He holds a PhD in International Relations from American University.  His research interests include U.S.-Latin American relations, Latin American foreign policy, small states, and the dynamics of asymmetrical international relations. His first book, Latin America Confronts the United States: Asymmetry and Influence (Cambridge University Press, 2015) was named one of the best books of 2016 by Foreign Affairs.

Bert Hoffmann is Senior Researcher at the GIGA German Institute of Global and Area Studies and Head of the GIGA Berlin Office. He also is Professor of Political Science at the Freie Universität Berlin. His publications include journal articles and books such as Emigrant Policies in Latin America and the Caribbean (with Luicy Pedroza and Pau Palop), FLASCO Chile 2016; ‘Bureaucratic socialism in reform mode: the changing politics of Cuba’s post-Fide’l era, in: Third World Quarterly, 37, 9, 2016, pp. 1730-1744; Debating Cuban Exceptionalism (with Laurence Whitehead), Palgrave 2007; The Politics of the Internet in Third World Development; Routledge 2004

Timothy Power is Professor of Latin American Politics and Head of the School of Global and Area Studies in Oxford.  With Paul Chaisty, Nic Cheeseman he co-authored Coalitional Presidentialism in Comparative Perspective: Minority Presidents in Multiparty Systems (Oxford University Press, 2018).