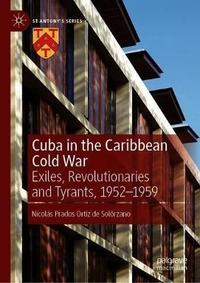 Please email administrator@lac.ox.ac.uk with your e-mail address so we can register you. The deadline to register is 29 October  at 12 noon

Nicolás Prados is a DPhil student at the University of Oxford, where he completed his MPhil in Latin American Studies.  His doctoral dissertation examines the struggles for democracy in the Caribbean between 1944 and 1963.  His book Cuba in the Caribbean Cold War: Exiles, Revolutionarias and Tyrants, 1952-1959 has just been published by Palgrave/Mcmillan.

Laurence Whitehead is a Senior Research Fellow in Politics at Nuffield College, Oxford University, and until 2015 was Senior Fellow of the College.  During 2005/6 he served as Acting Warden there.  In 2011/2 he served as Senior Proctor of the University.   His most recent books are Latin America: A New Interpretation, (Palgrave, 2006 second revised updated edition 2010); Democratization: Theory and Experience (OUP, 2002 – Spanish edition with FCE in 2011).  His most recent edited publications include The Politics of Recall Elections (Palgrave 2020),  Let the People Rule?  Direct Democracy in the 21st Century  (ECPR Studies in European Political Science, 2017)  edited jointly with Saskia Ruth and Yanina Welp, and  Illiberal Practices:Territorial Variance with in Large Federal Democracies ( Johns Hopkins UP, 2016) which he co-edited with Jacqueline Behrend. There is also  Democratization in America: A Comparative –Historical Analysis (Johns Hopkins UP, 2009) which he edited jointly with Desmond King,Robert C. Liebermen, and Gretchen Ritter, and (jointly with Marcelo Bergman)  Citizen Security in Latin America (Notre Dame University Press, 2009).  He is also the author of a significant number of journal articles, including, among the most recent, publications in the  Journal of Democracy , Democratization, The Taiwan Journal of Democracy; Colombia Internacional; The Journal of Political Ideologies; Perspectives on Politics.  He  has recently contributed two chapters to the latest  TRU Project volume Democracy Under Threat: A Crisis of Legitimacy? Edited by Ursula van Beek (Palgrave, 2019), and he also wrote “Depth Perception: Improving Analytical Focus through Cross- and Inter-Regional Comparisons” in A Ahram et al (eds) Comparative Area Studies (OUP , 2018).    He is editor of an Oxford University Press series, ‘Studies in Democratization’ and Honorary President of the Conseil Scientifique of the Institut des Ameriques in Paris, and belongs to the steering committee of the Red Eurolatinoamericana de Gobernabilidad para el Desarrollo.