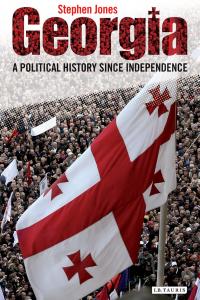 Professor Stephen Jones received his PhD from the London School of Economics and Political Science in 1984. He has taught at the universities of California, London, and Oxford.  He was a Research Fellow at Harvard University and a Senior Associate Member at St Anthony’s College, Oxford. Since 1989 he has taught at Mount Holyoke College in the USA. Professor Jones has written over 100 articles and chapters on Georgian and Caucasian affairs.  His books include Socialism in Georgian Colors: The European Road to Social Democracy, 1883-1917 (Harvard University, 2005), War and Revolution in the Caucasus: Georgia Ablaze, (ed., Routledge, 2010), Georgia: A Political History Since Independence(I.B. Tauris, 20012), and The Birth of Modern Georgia: The First Georgian Republic and Its Successors, 1918-2010, (ed., Routledge, 2013).  He was the English Language Editor-in-Chief of kartlis tskhovreba(The History of Georgia), (Georgian Academy of Sciences and Artanuji Publishers, 2014), and principal editor for a three volume set in Georgian of Noe Jordania’s speeches and writings. Noe Jordania was the first President of the Democratic Republic of Georgia (1918-21). Professor Jones is a Foreign Member of the Georgian Academy of Sciences and received an honorary doctorate from Tbilisi State University in 2012, and Ilya State University in 2018.  He is currently working on a book about the Democratic Republic of Georgia (1918-21).

The seminar will be followed by a Geogrian wine reception.