Forging the Golden Urn: Qing Empire and the Politics of Reincarnation in Tibet, 1792-1911 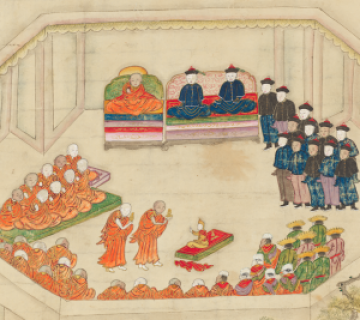 This talk will recount the previously untold history of the Golden Urn, a Chinese bureaucratic device that was exported to Tibet in 1793 and transformed (at least provisionally) into a magical instrument for divining the true identities of reincarnate lamas. Over the course of this transformation: 1) Qing imperial claims of sovereignty became conflated with the desire to control divination, 2) imperial agents grappled with issues of faith, persuasion, and shamanism in an empire-wide campaign to impose the Urn, and 3) Tibetan elites themselves ultimately reinvented the urn as an indigenous ritual and engaged in a decades-long effort to suppress dissent and legitimize the Qing state.

Max Oidtmann is a historian of Late Imperial China (1368-1912) and Inner Asia (Islamic Central Asia, Tibet, Mongolia, and Manchuria). He also is interested in modern China and the affairs of minority ethnicities in the People’s Republic of China. He is the author of the forthcoming monograph, Forging the Golden Urn: Qing Empire and the Politics of Reincarnation in Tibet (Columbia University Press, 2017). His current research is on the legal culture of Tibet during the Qing dynasty (roughly 1636-1912). At Georgetown, he teaches Asian history, as well as specialized courses on the history of China, Islam and Muslims in East Asia, Tibet, and comparative studies of empire and colonialism. Dr Oidtmann received his PhD from Harvard University in History and East Asian Languages in 2014.