Easy Riders and Good Fellows: Rebellion, Masculinity, and the Market in Contemporary Chinese Fiction and Film 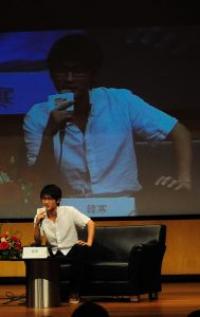 As a so-called 'bad boy' novelist, rally-car driver, blogger and filmmaker, Han Han has been hailed as the voice of youthful rebellion since he first shot to fame in 1999 at the age of 17. Since then, the 'Han Han phenomenon' has emerged, combining counter-cultural posturing with a string of blockbusters and an equally long string of sponsorship deals.  While the majority of commentators concentrate on the theme of dissidence and commercialism in Han Han’s works, Pamela Hunt points to another crucial element: his representation and enactment of masculinity. Focusing on the recurring motif of travel, this talk explores how Han repeatedly associates manliness with the adventure of the open road. In drawing on a range of global and local images of male travellers, Han Han reveals how masculinity in contemporary Chinese culture can develop through an interweaving of market forces, global cultural flows, and long-established cultural archetypes. Mobile masculinity in Han’s works and public image are explicitly linked to cultural rebellion; this talk concludes with a discussion of the implications of this for gender relations within his works, and popular Chinese culture as a whole.

Pamela Hunt is a Chiang Ching-kuo postdoctoral fellow at the University of Oxford China Centre, and a Junior Research Fellow at Brasenose College, Oxford. Her research focuses on masculinity, rebellion and mobility in post-1989 Chinese literature.