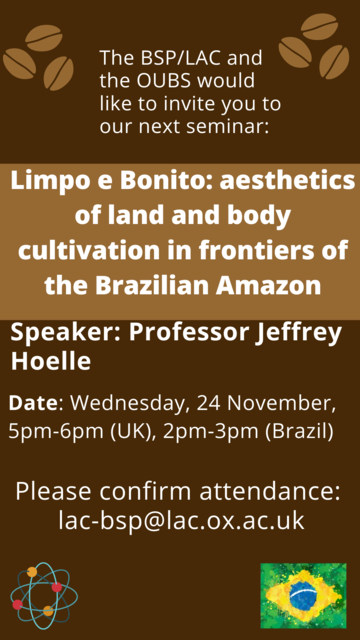 Jeffrey Hoelle is an associate professor of anthropology at the University of California, Santa Barbara.  His research focuses on how non-indigenous Amazonians relate to nature along the frontiers of the Brazilian Amazon.  He seeks to understand the on-the-ground logic of Amazonian deforestation from the perspective of diverse actors, including gold miners, cattle ranchers, colonists, rubber tappers, and urbanites.

Hoelle’s first book, Rainforest Cowboys: the rise of ranching and cattle culture in Western Amazonia, examined the cultural dimensions of the expanding livestock industry in the Brazilian Amazon, with a focus on the political-economic structures and cultural constructions that promote a cattle-centered vision of land use, popular culture, and rural identity.  Rainforest Cowboys received the annual Book Award from the Brazil Section of the Latin American Studies Association in 2016. A Portuguese- language translation of the book is forthcoming from the Federal University of Acre Press (EDUFAC) in 2021.

While at Oxford, Hoelle will be working on his second book, The Cultivation of Land and Body Covers in the Brazilian Amazon. The book seeks to understand a system of thought that guides how the people driving and inhabiting the Amazonian frontier conceptualize and act on nature. Specifically, he examines how people think about and manage vegetation that grows beyond the human body, but also the hair that grows on the human body.  He describes how these “covers” are shaped, perceived, and evaluated in similar ways across different contexts, from the forest to rural pastures and urban parks to the homes and bodies of frontier residents.  A focus on covers helps to better understand an ideology of cultivation that structures domineering practices of nature control implicated in environmental destruction and social inequality.