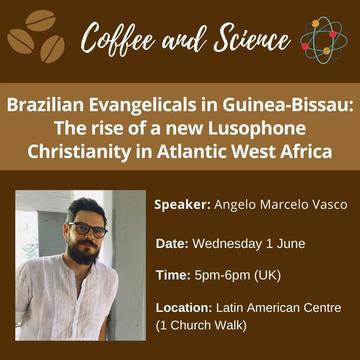 Angelo Marcelo Vasco is a DPhil candidate in Anthropology at the University of Oxford. He holds an MSc in Social Anthropology from the LSE, a BA in Social Sciences from the Federal University of Paraná (UFPR) and an LLB also from the Federal University of Paraná (UFPR). His doctoral research looks at the religious dimension of social change in Guinea-Bissau with a focus on the growth of Evangelical churches, particularly those coming from Brazil. They are the latest addition to a religious field where Islam, European Catholicism and Traditional Religion have interacted for centuries. Angelo utilises discussions around the concept of conversion as a template for his investigation paying attention to the particularities of the Bissau-Guinean case as well as its connections with broader global processes related to the rise of charismatic religion. In this presentation, he will describe the social context in which Brazilian churches and missionaries began to arrive in large numbers to Guinea-Bissau, what allowed them to thrive in the country, and the discourses and strategies they employ to proselytise.