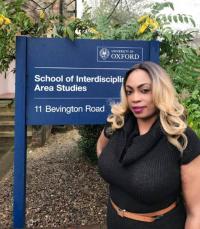 Despite the fact that it is believed that extreme global poverty has reduced, it is still endemic in certain regions of the world. In addition to poverty in some regions of the globe, globalisation has seen the rise in transnational and organised crimes such as human trafficking.  Trafficking in women and children is an established and complicated issue, often intertwined with illegal migration and transnational organized crime. In spite of various governments and non-governmental efforts to combat human trafficking, the problem seems to be increasing at a frightening pace. In fact, the changes in political and economic climates, freedom and relative political stability may have made female migrants from Nigeria more vulnerable than ever before to modern day slavery.

Nigeria is one of the leading African countries engaged in human trafficking with cross-border and internal trafficking. Scholars have opined that the oil boom in the 1970s in Nigeria generated the chances for both in and out migration in the country. This created opportunities for taking advantage of economically deprived women and children for international trafficking into forced labour and prostitution. By relating economic globalisation with relative deprivation, leading to human trafficking, this paper contributes to the global debate and narrative on modern day slavery in the form of human trafficking.

I joined the African Studies Centre in 2017 as a Commonwealth Research Fellow. I trained as a criminologist in the Department of sociology, University of Port Harcourt, Nigeria. My area of specialisation is on gender and crime. My current research emerges from long term research on human trafficking of women and children from Nigeria to Europe. I am a Fellow of the African Science Leadership Programme  (ASLP) University of Pretoria/Global Young Academy; A fellow of the Rachel Carson Center (RCC) for Environment and Society, LMU, Munich, Germany; and also a Fellow of the Global South Scholar in residence programme, Graduate Institute for International and Development studies, Geneva, Switzerland.