Workshop “Investigating Crimes against Humanity in South America: Challenges for the Present and the Future” 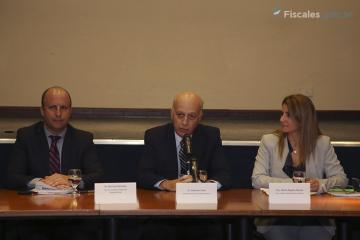 The Latin American Centre of the University of Oxford and the Public Prosecutor's Office for Crimes against Humanity of the Republic of Argentina (PCCH) organised a two-day workshop in Buenos Aires on May 8 and 9 on the topic of “Investigating Crimes against Humanity in South America: Challenges for the Present and the Future”.

The event was held within the framework of Dr Francesca Lessa’s Marie Skłodowska-Curie project "Operation Condor: Accountability for Transnational Crimes in South America.”

The event brought together over 100 lawyers, judges, prosecutors, and human rights activists from Argentina, Brazil, Chile, Paraguay, and Uruguay. The workshop's goals were to exchange experiences and knowledge regarding the investigation and prosecution of crimes against humanity in South America and identify specific actions points and priorities on how best to move forward in this matter in the near future.

The opening panel featured Eduardo Casal (Argentina’s interim Attorney General), Mariano Borinsky (judge of the Federal Criminal Appeals Chamber), and María Ángeles Ramos (prosecutor of the PCCH). During the one-and-half-day workshop, six thematic sessions were held, tackling topics such as the status of prosecutions for crimes against humanity in South America, the investigation of Operation Condor atrocities, prosecutions of sexual violence, archival documents and their use during trials, the role of civil society, and the search for the victims of enforced disappearances.

Read see the attached pdf for the full programme (in Spanish)

Watch a short video about the event here (in Spanish) - https://www.youtube.com/watch?v=0bSma3czvsw

Read a detailed summary of the workshop here (in Spanish) - https://www.fiscales.gob.ar/lesa-humanidad/el-procurador-general-de-la-nacion-interino-eduardo-casal-encabezo-la-apertura-del-taller-la-investigacion-de-los-delitos-de-lesa-humanidad-en-sur-america-desafios-para-el-presente-y-futuro/