What’s Distinctive About the Mess Jacob Zuma Has Made - NY Times Article by Prof. Jonny Steinberg

What’s Distinctive About the Mess Jacob Zuma Has Made 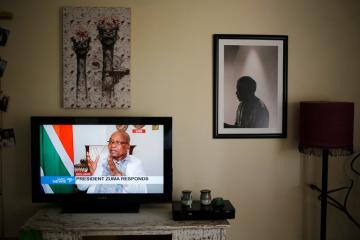 CAPE TOWN — Jacob Zuma resigned on Wednesday as the president of South Africa, after his party, the African National Congress, pressured him to step down a year and a half before his second term would end in the summer of 2019. Cyril Ramaphosa, the anti-apartheid leader, businessman and deputy president, who was elected A.N.C. president in December, succeeded Mr. Zuma as president on Thursday.

Mr. Zuma’s nine-year tenure was marked by corruption, mismanagement and numerous scandals, and the country’s reputation and economy took a battering.

He retrofitted state institutions to divert resources to his family and his business partners. At current estimates, the amount of public money that has been appropriated runs into billions of dollars. He staffed the prosecution authority and the police service with supplicants who dared not go after him and his cronies. He threw out the top managers of the tax collection authority and replaced them with his own people, partly to avoid being prosecuted for tax evasion.

After a mighty battle, the A.N.C. turned against Mr. Zuma, and the Parliament recalled him from office. His successor, Mr. Ramaphosa, has announced that a period of darkness is coming to an end.

South Africa is a country saturated in the politics of race. A measure of the impact Mr. Zuma’s tenure had on relationships between black and white South Africans is necessary. The white minority lost political power nearly a quarter-century ago, but its influence in the economy, in the professions and in the culture of the country’s institutions is immense. White political power is gone, but the white gaze remains pervasive.

Some argue that the abhorrence of the Zuma presidency has broken the spell of race. Almost all of those who led the campaign to bring him to account were black, like Thuli Madonsela, the former public protector, who played a heroic role in exposing Mr. Zuma’s corruption. South Africa’s judiciary, which is majority black, defended the independence of the courts with extraordinary courage and under great pressure. After this display of black courage, why would it matter what white people think?

But South Africa is too fraught and complex a place for such a simple story to ring true. More plausible is that each pinprick penetrating Mr. Zuma’s skin is felt by black South Africans, even those who are horrified by what he has done.

Beneath the surface of public life, one can detect a strange, subliminal to-and-fro. Last year, for instance, a superb book describing in meticulous detail the deep corruption of the late apartheid years, “Apartheid Guns and Money,” by Hennie van Vuuren, was a runaway best seller. It deserved to be widely read, but the scale of its success is partly a function of its utility as a weapon against white arrogance. “However bad Zuma is,” its many black readers could say to themselves, “you people were worse.”

Every weekday, get thought-provoking commentary from Op-Ed columnists, the Times editorial board and contributing writers from around the world.

To shrug and say that we are all equally capable of stealing public money is to miss what is distinctive about the mess Mr. Zuma has made. For the truth is that Mr. Zuma and his allies were corrupt partly because they felt a sense of grievance intimately connected to their experience of race.

When Mr. Zuma became president of South Africa in 2009, he rallied behind him an alliance of people who felt themselves to be marginal and neglected, not just in relation to the world economic order or white South Africa but also in relation to the A.N.C. itself. The A.N.C. has been run by people drawn from the ranks of an urbane, cosmopolitan elite.

Mr. Zuma represented a dramatic change in this tradition. Although he spent years in exile and climbed the ranks of the A.N.C., his biography was unlike any of his predecessors’. Nelson Mandela was born into royalty. Thabo Mbeki was the son of prominent intellectuals. Mr. Zuma’s mother worked in the kitchen of a white family and was too poor to provide her son with a formal education. He grew up herding cattle in the hinterland.

When he came to power in 2009, he did so with the support of organizations representing much of the urban working class — the country’s largest trade union and the South African Communist Party.

But he soon dropped these organizations and turned for support to rural South Africa, in particular to traditional leaders and to the elites of far-flung provincial capitals. They carried with them into power an abiding sense of powerlessness, a feeling that the very institutions they now controlled were alien and belonged to others. In office, they believed that they had entered into their enemy’s mansion. It seemed to be payback time.

In a speech delivered to a room of black businesspeople in December 2016, Mr. Zuma warned of the sophisticated ways in which the enemy confuses black people. One source of such confusion was the prevailing economic orthodoxy. Mr. Zuma suggested that the most fundamental of economic laws was merely nominal; remove the scales from our eyes and we see that so-called economic laws are a ruse invented by the powerful.

His genre of criminality is light-years from the sort that characterized the apartheid state. The corruption of apartheid’s leaders stemmed from arrogance; they believed that they could control the world forever. Mr. Zuma’s corruption stems from the grievances of a man who feels very small.

This sense of grievance was on display in the last words he uttered publicly as president. In a swipe at his successor, Mr. Ramaphosa, Mr. Zuma suggested that those in the party who had unseated him were “serving the interests of the oppressors of yesteryear, who joyfully celebrate as we lynch one another.”

Black nationalism in South Africa has many faces. Mr. Ramaphosa represents a strand that is bourgeois, worldly and comfortable with power. There is also a militant, socialist strand of black nationalism, but it is on the wane. And there is the strand represented by Mr. Zuma, who governed as a man shaped and distorted by the violence and oppression of white supremacy.

I am of course alive to the irony of a white South African like me saying that a black president’s corruption was motivated by racial grievance. Many South Africans, black and white, would regard this argument as an excuse for the intolerable. But we should be honest enough to accept that even now, notwithstanding that apartheid has been gone since before nearly half the South African population was born, the legacy of white supremacy has lived on in the man who was president.