The power of rules or the rule of power?

Russia’s startling annexation of Crimea in 2014, its subsequent interventions in eastern Ukraine and Syria and its growing diplomatic and strategic presence in the Middle East have left many Western governments struggling to assess the direction in which Russia’s foreign policy and ambitions are headed. In justifying its actions and criticising those of other nations, Russia often puts forward its own interpretation of international law. But is this a determined attempt at revisionism – the undermining and changing of the ‘rules-based’ international order – or are there ambitions beyond mere rule-breaking and rule-making as Russia seeks to strengthen its influence on the international stage? 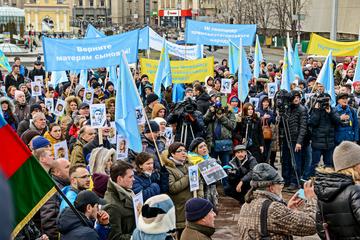 March of solidarity in Kiev, Ukraine, in support of the people of Crimea, February 2017 (photo: Serhii Simonov)

OSGA’s Roy Allison, Professor of Russian and Eurasian International Relations and Director of the Russian and Eurasian Studies Centre at St Antony’s College, researches and analyses the way in which Russia has used legal discourse in recent years, marrying this information with officially stated Russian views and observed behaviour to shine a light on Russia’s intentions. ‘The principles of international law are expressed in foundational documents like the UN Charter, interpretations of customary law and international judicial opinion,’ he explains. ‘These concepts and a belief in their rightness are central to the language of diplomacy and the way states interact – this framework constrains and enables state action, even if, occasionally and controversially, powerful states break rules.’

Recent Russian foreign policy has visibly departed from a normative consensus about core principles and rules of international order – particularly the post-Cold War European territorial settlement – in favour of reliance on force and coercive diplomacy. In some situations, Russia presents itself as a stalwart supporter of traditional sovereignty norms, defending the incumbent regime, as in Syria, where its military intervention is at the invitation of the threatened government and is cast as a counterterrorist operation. In other cases, such as its interventions in Georgia and Crimea, Russia portrays itself as protecting either newly formed ‘Russian citizens’, the ‘historic rights’ of ‘ethnic Russians’ or Russian speakers who live in the ‘Russian world’ of former USSR territories.

‘Russia certainly currently appears to be striving for greater influence on international rule-making and interpretation, and President Putin is also presenting himself as a champion of those states which resist any further erosion of the traditional hard shell of state sovereignty enshrined in the UN Charter – a view of sovereignty that has been encroached on by the human-focused emphasis of Western thinking about international law and norms,’ says Roy. ‘He is also intent on maintaining the image at home of Russia’s strong, independent statehood, as well as extending Russia’s influence on Middle Eastern affairs.’

Roy’s skilled analysis of the complexities and contradictions of Russia’s manoeuvrings is invaluable to policymakers evaluating how Western states should respond. His published articles in International Affairs, the journal of Chatham House, the prestigious international affairs thinktank, are widely read by officials and journalists as well as academics, and in 2018 he was invited to present a paper on Russia’s use of international law in the crises around Syria and Ukraine, at a seminar organised by the Eastern Research Group of the UK Foreign Office. In previous years he has provided evidence to hearings of the House of Commons Foreign Affairs Committee and Defence Committee and the House of Lords European Union Committee. 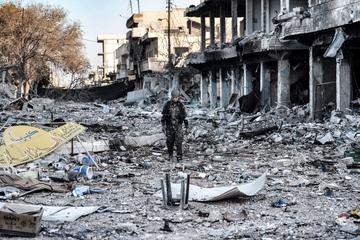 A fight against terrorism? Devastation in Syria (photo: quetions123)

In 2020 Roy participated in two important events involving senior current and former officials. At the first, he spoke on ‘tacit codes of conduct’ to an online Russian–NATO dialogue of senior Western and Russian military and civilian specialists, organised by institutes of the Russian Academy of Sciences. At the second, he gave a keynote address on ‘Russian revisionism, legal discourse and rules-based international order’ at the EU Centre for Excellence for Countering Hybrid Threats (Hybrid CoE) to an audience of officials and specialists from many EU states – and his article on the topic is now recommended reading on the Hybrid CoE website.

‘Much of my recent work has been on the Russian legal and normative claims around its intervention in Syria, so I was glad of the opportunity in March 2021 to put a question on the Russian role directly to Russian Foreign Minister Sergei Lavrov, as an online participant in the Valdai Middle East Conference in Moscow, which brought together (in person) specialists, politicians and officials from many Middle East states,’ says Roy. ‘I was surprised he was ready to answer at length, both on Russian actions in Syria and setting out the Russian critique of the rules-based international order.’ The text of his reply is now on the Foreign Ministry website.’

An expert on the burgeoning area of Russian policy in the Middle East, Roy has also written the first scholarly analysis of the Russian legal and normative case for its military intervention in the Syrian Conflict. It appears in Russia and the Middle East: Old Traditions, New Trends ed.Nikolay Kozhanov (forthcoming: Oxford University Press and Hurst).