Research Result from the Project: Becoming or Getting By: Youth Opportunities in Times of Economic Crisis

This project was financed by the John Fell Fund, University of Oxford and led by Dr Andreza Aruska de Souza Santos

Crises and lack of opportunities can explain the results obtained through a research partnership between the University of Oxford and UFPE, UFMG, UFSCar and Cebrap 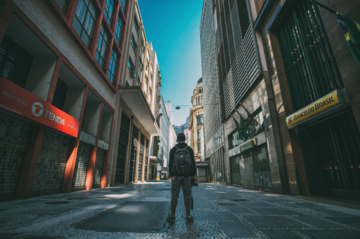 In Brazil, 43.9% of young people between the ages of 16 and 26 say they are inclined to seek military careers. This is what a survey carried out between October and November 2021 shows, with the application of 2,055 questionnaires to a representative sample of the Brazilian population in this age group. The survey was carried out in partnership between the University of Oxford; the federal universities of Pernambuco (UFPE), Minas Gerais (UFMG), São Carlos (UFSCar) and the Brazilian Center for Analysis and Planning (Cebrap).

Andreza Aruska de Souza Santos, from the Oxford School of Global and Area Studies, says that the motivation for carrying out the study came from the scenario of growing military presence in Brazilian society. The researchers record, for example, the existence of more than 6,000 commissioned positions in the Federal Government held by the military in 2021 (18% of the total), as well as the growth of candidacies to the state and federal legislature – from 786 to 1,199 between 2018 and 2020. The most relevant increase, however, occurred among elected deputies and senators – from 14 to 76 in the same period (or 442% more in 2020).

“In the research I carry out, I had this perception that, among the middle and lower middle classes, the military career was becoming an important option. I would meet, for example, young people who, instead of looking for a university, were already taking preparatory courses for military careers”, says the researcher. “As Gabriel Feltran works with urban peripheries and in contexts related to youth, we talked about the topic, and he told me that he was also seeing the armed forces and the police become more popular”, she adds, citing a professor from the Department of Sociology. from UFSCar who is also part of the team of researchers.

To carry out the research, questionnaires composed of 58 items were applied via the Internet, with 2,055 people from all Brazilian regions, in a survey with a confidence interval of 95% and a maximum error of 2.2%. These questions are linked to eight categories of analysis: propensity to pursue military careers; perceptions about these careers; association with conservative views and attitudes; job skills and aspirations; labour market perceptions; sociodemographic profile; school and career trajectory; and family context.

“Of all the conditions that could explain the interest in military careers – such as ideological factors – concrete material issues, age, gender, race, class clearly show that the tendency for this interest grows as the vulnerability of young people increases”, highlights Gabriel Feltran. “Despite a discourse of entrepreneurship that floods the environment where these young people circulate, which encourages individual initiative as opposed to stable jobs, they are making very rational choices, perceiving in military careers the possibility of stability, growth and, also, issues very basic, such as food security, in a country where more than 33 million people live in a situation of food insecurity”, he adds.

The research results, as well as the details of the methodology used, are published in the article “Dataset on the perceptions of Brazilian youth toward a military career post-Covid-19” (under peer review). “An important aspect of this research is the public availability of all replication materials (original data and computational scripts). That way, anyone can verify the results and reuse the information in other research projects,” adds Dalson Figueiredo, professor at the Department of Political Science at the Federal University of Pernambuco (UFPE).

“Today there is a very different civil-military balance from previous governments. We might think, therefore, that a change of government would lead to changes in this scenario, but the research shows a legacy beyond ideological issues. It shows that economic issues can generate a lasting imbalance, which leads us to think about what kind of opportunities we are creating for these young people. In the survey, we saw that 67.3% of young people consider the job offer in their respective cities as low, very low, or non-existent, and this number is even worse among those who live in the northeast (75.9%)”, concludes Andreza Aruska, the researcher from the University of Oxford.

“Preliminary analyses of survey data indicate an inverse association between interest in military careers and parental education. This reinforces our hypothesis that this willingness to join the Armed Forces or the Military Police is related to the social and economic conditions of the families”, says Valéria Cristina de Oliveira, professor at the Department of Sciences Applied to Education at the Federal University of Minas Gerais.

Adson Amorim, a doctoral student at the Graduate Program in Sociology at UFSCar, adds that “there is very little information available on entry into military careers, both police and the Armed Forces, in contrast to data on the growth in the presence of military personnel in the Legislature and in commissioned positions in the federal government”.

For the future, the researchers list as priorities the monitoring of interest in military careers over time, as well as analyses that explain how the propensity to enter these careers influences society and its institutions.

Pre-print with results (under peer-review):