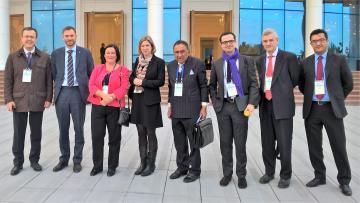 He had discussions in Tashkent in the Uzbek Foreign Ministry’s Centre for International Relations Studies and the Institute for Strategic and Regional Studies under the President of the Republic of Uzbekistan. He also fielded an hour of question from postgraduate students at the University of World Economy and Diplomacy. In Samarkand he took part in a high-level conference on Security and Sustainable Development in Central Asia under the auspices of the United Nations. The conference was addressed by the President of Uzbekistan, Shavkat Mirziyoyev; the foreign ministers of Kazakhstan, Kyrgyzstan, Tajikistan, India, Iran and Afghanistan; the heads of the following international organisations, OSCE, SCO, CIS Executive Committee, ECO and the EU High Representative for Foreign and Security Policy; and many other senior officials and politicians. Professor Allison was the only UK academic on the programme. In a presentation on ‘Regional organisations and multilateral approaches to security challenges in Central Asia’ he called for the revival of a high-level intergovernmental dialogue among Central Asian leaders to address various pressing regional security problems. He also gave interviews to the Uzbek TV and radio.