Obituary: Asma Jahangir (1952-2018): An icon of democracy, human rights and the rule of law in Pakistan 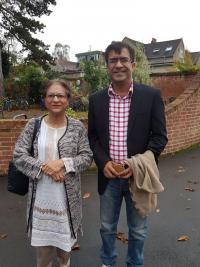 Asma Jahangir was a staunch human rights activist, a leading lawyer and fearless supporter of democracy and rule of law in Pakistan. She was the founding member of the Human Rights Commission of Pakistan (HRCP), the Women's Action Forum (WAF) and Pakistan-India Peoples Forum for Peace and Democracy (PIPFPD), which represent the three causes she stood for during her whole life- the human rights, the women emancipation and the reconciliation with neighbouring India. Asma actively fought against the dictatorships of General Zia-ul-Haq (1979-88) and General Pervez Musharraf (1999-2008) and was jailed during 2007 Lawyers' Movement in Pakistan. In the recognition to her services for democracy and human rights she received Sitara-i-Imtiaz and Hilal-i-Imtiaz, the two most prestigious civilian awards by the government of Pakistan in 2010. Internationally she also received Ramon Magsaysay Award, Martin Ennals Award for Human Rights Defenders, the UNESCO/Bilbao Prize for the Promotion of a Culture of Human Rights, an Officier de la Légion d'honneur by France, Right Livelihood Award 2014 and the 2010 Freedom Award.

Asma Jahangir has always been a beacon of light and a source of inspiration for all Pakistanis who strongly believe in a democratic, progressive and inclusive Pakistan. Despite living in same country and same city, Islamabad for many years, I could never get a chance to hear her live or meet her. Last October when I arrived Oxford and upon arrival came to know about her lecture on 'Rule of Law and Democratic Development in Pakistan' in Sarfraz Pakistan lecture series at Wolfson college, I was genuinely excited to hear her for the time live. I along with my friend, Saeed Soomro arrived from London almost an hour before the scheduled time of lecture in a hope to get a chance to meet her. While I was trying to find out at reception whether she had arrived yet or not, I saw her standing outside the building all alone enjoying her cigarette. At first, I thought it may not be a good idea to disturb her but then selfish me said such a wonderful opportunity to talk to her will not come again. We went outside, had a brief chat with her on political situation in Pakistan and took a few pics as well.

In her lecture, Asma Jahangir openly criticised the Pakistani courts for siding with dictators in past and doing a very selective justice of politicians only. She said in Pakistan there was no real accountability.  She added, the accountability in Pakistan was just a bargaining chip against non-behaving politicians.

All her critics and admirers both agree that she was by far the bravest woman in Pakistan who would say what she believes was right without any fear of the price she might have to pay for her words. She openly used to challenge the all-powerful Pakistani establishment, judges, politicians, religious fanatics and militants. She even fought the cases of those who once termed her traitor and agent of the Indian intelligence agency, Research and Analysis Wing (RAW); when they were involved in cases of human rights violations. She was the staunch supporter of freedom of speech even for her worst enemies. She was criticised by her admirers and critics alike, when she defended Muttahida Qaumi Movement (MQM) chief, Altaf Hussain in the Supreme Court of Pakistan. After the Pakistan Electronic Media Regulatory Authority (PEMRA) had ordered a blackout of the speeches of Mr. Altaf Hussain following his 'anti-Pakistan' remarks in August 2016. She used to say she would always standby her principles, it does not matter whether her enemies would benefit from her principled stance.

It is true she would never say something only to please her friends or well-wishers, she would always speak her mind with her strong conviction whatever she considered was right in her own understanding. During her recent last lecture in Lady Margaret Hall, Oxford on February 05 to commemorate Benazir Bhutto’s 10th anniversary; at the end of the lecture, answering the question of Mr. Ziauddin Yousafzai, the father of Mallala Yousafzai; she said she knows many of her audience would not be happy, but she must say Z.A. Bhutto was not a democrat, as he was extremely brutal against his political opponents while there was not a single political prisoner in Pakistan in Benazir era. She shared many instances where she openly argued and fought with her friend Benazir Bhutto on principles.

Asma Jahangir’s last political activity was her speech at Pashtun protest in Islamabad just a day before her death, organised to demand arrest of the police officials who are responsible for the extra-judicial murder of innocent Pashtun boy, Naqeebulah Mehsud in Karachi. In her speech Asma said she was taking up the cases of the kids of Swat who were kept in the ‘internment centres of Swat’ after the Swat operation in 2009-10 for so many years. She said it was unlawful to keep them in illegal confinement. She called those kids as her own kids and asked the official authorities if there was any case against them that must be brought before the court of law, as she was against the capital punishments given to them through the military courts. She went on to add, she knew very well who was occupying the houses of those who were displaced in Swat. The tone and tenor of Asma Jahangir in her last speech clearly shows that she was a true lioness who kept roaring for the rights of voiceless people of Pakistan till her last breadth.