Nayanika Mathur’s Research on the Indian state, law, and bureaucracy 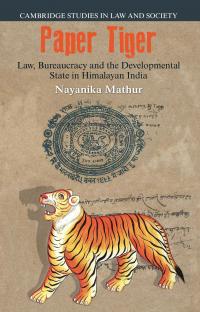 Nayanika Mathur is an anthropologist with an area interest in South Asia. She is the author of Paper Tiger: Law Bureaucracy and the Developmental State in Himalayan India, Cambridge University Press (2016).  Paper Tiger is an ethnography of the developmental Indian state. It traces the translation of two widely commended laws into practice through an ethnography of quotidian bureaucratic life. Paper Tiger rejects standard explanations for developmental/state failure – rooted in inefficiency, incapacity, dysfunctionality, corruption, or violence – to present an alternate, ethnographically driven reconceptualisation. One of its original contributions has been to demonstrate the counter-intuitive effects of the push for ‘transparency’ in the functioning of the post-liberalisation Indian state. It also makes a strong case for restudying and re-analysing corruption in the global South. Ultimately, this work devises a new language to capture the banality of state bureaucracy and makes a radical case for rethinking what the state is in practice and, therefore, how notions of success and failure of development need to be assessed.

In recognition of the originality of Paper Tiger, this book won the Sharon Stephens Prize awarded bi-annually by the American Ethnological Society for the best first book by a junior scholar.

Nayanika’s doctoral research on financialisation, bureaucracy, corruption, and transparency led to a call for a new anthropology of bureaucracy. Currently, Nayanika is extending the arguments of Paper Tiger through a focus of the relationship between politics, technocracy, new technologies and bureaucracy. Her research and writing has been supported by fellowships awarded by the British Academy and the Leverhulme Trust held at Cambridge’s Centre for Research in the Arts, Social Sciences and Humanities (CRASSH).