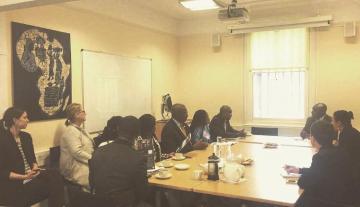 Johnson N. Gwaikolo is a seasoned administrator with vast experience both in the private and public Sector. He has worked in various branches of the Liberian government, including working with other non-governmental agencies.
Currently, Johnson N. Gwaikolo serves as a district representative for District 9 Nimba County and Co-Chairs the Committee on Public Works. This Committee is responsible for surveying, drafting and designing construction and supervising construction contracts, such as contracts for the maintenance of roads, bridges, and public buildings.

Miss Dennis is one of the newest and youngest Members of the 54th National Legislature. She represents one of the largest counties in the country, District 4 Montserrado County. As a Member of the House, she serves as Chair on the Claims & Petition Committee, Co-chairs the House Modernisation Committee and is a Member of the Committee on Youth & Sports. She is a graduate of the Manchester University in the UK and holds a Masters in Petroleum Geosciences.

Hon. Munah E. Pelham-Youngblood is a philanthropist, entrepreneur and the face of the movement "Generational Change", a campaign for young people to get into politics. Currently Mrs. Youngblood is serving her 2nd term as a Member of the 54th National Legislature. She was elected at 27 years as the youngest politician in Liberia's history defeating 20 other candidates. Pelham-Youngblood was selected as one of the 50 most eminent Liberians, as one of Liberia's most influential Voices and as Legislator of the Year in 2012 and in 2015. At the National Legislature, she has been appointed on several Committees, including serving as Chair of the Committee on Executive. In the 53rd National Legislature session she served as Co-Chair on the National Women’s Legislative Caucus, Co-Chair on Contracts, Monopolies, Public Procurement & Concession Committee, was a Member on the Committee on Gender, Child Protection & Social Welfare, and sat on many others.

Byron Wehgbiah Zahnwea is a health administrator and has served as a County Health Officer for over 5 years at the Ministry of Health in Rivercess. Currently, he is a district representative of District 12 Rivercess County. Since his ascendency as a Member of the 54th National Legislature, he has been appointed to several committees including Agriculture, Forestry, Fisheries and National Security and Defence. He is also the Co-Chair of the Committee on Internal Affairs which has oversight over local government through supervision and direction of activities of the political sub-divisions and the central government.

Representative Julie Wiah ascended as a Member of the 53rd National Legislature following a by-election in Lofa County, which was heavily contested by ten candidates. She sought re-elections in 2017 and won again as an independent candidate. Now as a Member of 54th National Legislature, she is Chair of the Committee on Gender Equity & Child Development, is a Member on the Ways & Means Committee and the Committee on Health. Ms. Wiah is also Liberia’s Representative to the Pan African Parliament.
Prior to her ascendency to the House of Parliament, she worked at Airfrance and Cellcom, a mobile phone company in Liberia.

Mr. Jurry has a wealth of experience both from the private and public sector. He has significant experience in social, developmental and educational programs. Currently as a member of the 54th National Legislature, he represents Harper, Maryland County and has been appointed to on several committees. He Co-chairs the committee on Education, is a member on the Ways & Means Committee and is a Member on the Modernisation Committee.

Mildred has been the Chief Clerk of the House of Representatives since 2012 and holds a Masters in Public Administration from the University of Liberia. In her capacities as the Secretary General of the 54th National Legislature, she is the custodian of bills, amendments, resolutions and other Legislative documents.
Prior to her current position, she served as Acting Chief Clerk, Deputy Chief Clerk and Junior Stenographer in the 51st and 52nd National Legislature. Mildred has participated and organised several workshops and seminars including: The Second Annual Meetings of Secretaries Generals of African Parliaments, the 118th Assembly of the Inter-Parliamentary Union, etc.