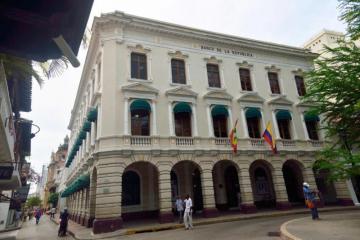 On 12 September, Professor Eduardo Posada-Carbó gave the inaugural lecture at the seminar ‘20 años de estudios sobre el Caribe colombiano’, held in Cartagena to celebrate the 20th anniversary of the Banco de la República’s Centro de Estudios de Economía Regional (CEER).  Established in 1997, the CEER has consolidated itself as the leading research centre of regional studies in Colombia:   During its 20 years of existence, the members of the CEER have produced over 300 working papers, including some 50 papers on economic history.  Professor Posada-Carbo’s lecture – ‘Del regionalismo a la nación en el pensamiento y obra de Rafael Núñez’ – dealt with the ideas of the early Núñez, from the time of his first public post in Panamá in 1848 until the publication of his essay on federalism in 1855.  His lecture highlighted the need to incorporate more fully Panamá in any attempt to understand 19th century Colombia; Núñez’s early adoption of a national, ‘granadino’ discourse; and Núñez’s puzzling embracement of federalism in 1855, in contradiction to both his earlier and later support for centralism.   Scholars from various universities and writers joined members of the CEER and the Banco de la República in an interdisciplinary exercise to examine the study of the Colombian Caribbean over the past two decades, covering the history, economy, anthropology, archaeology, politics and culture of the region.