Joan Martínez Alier Awarded the Balzan Prize. We publish here a text by Laurence Whitehead where he remembers him, from his first visit to the Latin American Centre 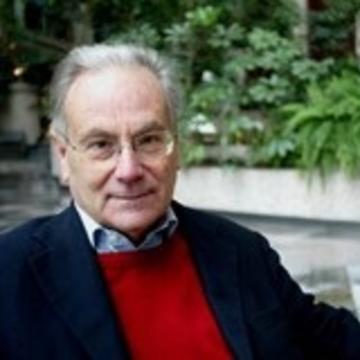 Professor Joan Martínez Alier, who was a Research Fellow at St Antony’s College from 1966 to 1973, and a visiting scholar in 1984-85, was awarded the 2020 Balzan Prize for Environmental Challenges.  We publish here a text by Laurence Whitehead where he remembers Joan Martinez Alier, from his first visit to the Latin American Centre.

Professor Juan Martínez Alier, who was a Research Fellow at St Antony’s College from 1966 to 1973, and a visiting scholar in 1984-85, was awarded the 2020 Balzan Prize ‘for the quality of his contributions to the foundation of ecological economics, his path-breaking analysis of the relationships between economies and the environment, his interdisciplinary as well as comparative approach, and his active role in the promotion of environmental justice’.

He was a Research Fellow at St. Antony’s College, Oxford University from 1966 to 1973 and again a visiting scholar there in 1984-85. In addition he held visiting appointments at the Free University of Berlin (1980-81), Stanford University, the University of California, Davis (1988-89) and FLACSO in Quito (1994-95). During 1999-2000 Professor Martinez-Alier was a Fellow in the Program in Agrarian Studies at Yale University in New Haven. From 1990 onwards Professor Martinez-Alier served as the Editor of the journal, Ecologia Politica (Barcelona). His publications are numerous and in English include: Labourers and Landowners in Southern Spain (London, 1971), Haciendas, Plantations and Collective Farms (Cuba and Peru) (London 1977), Ecological economics: energy, environment and society (Oxford, 1987), with Ramachandra Guha — India’s leading environmental historian, Varieties of environmentalism: Essays North and South. (London, 1997) (See Absract and Summary of this important work) and The Environmentalism of the Poor: A Study of Ecological Conflicts and Valuation (October 2003).

In the text that follows, Laurence Whitehead remembers Joan Martinez Allier from his first visit to the Latin American Centre.  His text will be published soon in Barcelona a Festschrift for Martínez Allier co-edited by Roldan Muradian and Sergio Villamayor-Tomás.

no vayas a ser esclava

My mother tried (unsuccessfully) to become a volunteer nurse on the Republican side in the Spanish Civil War, and prompted me at an early age to read George Orwell’ s Homage to Catalonia.  In my fifteenth summer, before the tourist boom, she took me for a week to Tossa del Mar, partly in the hope that I would learn a little Spanish.  I remember on the beach meeting another teenager, a couple of years senior to me, and  enquiring( inarticulately)  what he thought of Franco. At first he looked all round, then led me to a quiet spot.  “Odio a Franco.”. I tried to understand why, but the barrier separating us was more than linguistic. No-one I knew in London was as intense as this. “After the war he  killed my father, he killed my two older brothers. The only reason I survived was because I was so little.”.

Such antecedents shaped my reactions when, eight years later, I first met Joan Martinez-Alier  (known to us as Juan) - at the Latin American Centre in Oxford University, where I was beginning my academic career. My spoken Spanish was still shaky, but I had learnt to read quite well. Joan had just published his first book with Ruedo Iberico, an ethnography of olive growing in southern Spain, and he needed someone to help him translate into i grammatical English.  After a few months I became remarkably proficient in the specialized vocabulary  of olive  planting, hoeing, and harvesting, even though I  had never knowingly clapped eyes on an olive grove, and was still barely capable of a social conversation  in Spanish on more familiar matters. What did penetrate my consciousness was the spirit of the Miguel Hernandez poem quoted above.

Little by little I became acquainted with more of  Joan’s work and outlook, and over the ensuing half century our paths have crossed from time to time, although only rarely and  fleetingly. Since  the great  hinterland of his life is closed to me, all that I can contribute here are the following fragmentary and episodic  recollections. They concern his impact on me, rather than the overall arc of his existence.

Reading about his oliveros  reinforced one of my early professional biases. Whatever grand theory or social science orthodoxy happened to absorb my attention at any particular time, Joan (like my mother in this respect) always  reminded me of the need to listen to ordinary people, to value close observation of real conditions, to resist the  intellectual’s temptation to substitute  a fancy generalization for the granular  texture of  actual human practices. I was more of a welfare statist than Joan (always the anarchist at heart). But  Joan’s  encouragement of patient ethnographic enquiry, informed by a genuine openness to humanity’s strange diversity of “really existing” conditions, beliefs and practices,  has proved a vital antidote to the “ivory tower” distortions of a lifetime spent in Oxford Colleges.

Oxford’s Latin American Centre has  always needed some capacity to monitor and explain the course of the Cuban Revolution, and  (unlike in Spain)  there is almost no-one in British academia who has the  opportunity to consistently  pursue that thread of enquiry over the decades. On a modest scale that task has normally  fallen to me,  and in the early days Joan played a creative role in strengthening  that project. The core problem has always been that the Fidelista lobby can barely tolerate    critical commentary, while the massed weight of US (and therefore English language) scholarship  on Cuba is suffused with anti-fidelista and Miami-centric bias to such an extent that  little in-between can get a hearing.  But a few of us could listen to both sides without being captured by either orthodoxy, and the mandate of the Latin American Centre was  to pursue the evidence that both camps  distorted and disvalued. In particular, my problem has always been that although I could easily access both Havana and Miami, I  lacked the face-to-face contact needed to  reliably bypass the clashing ideologies. In this  regard, at an early stage in my career, I recall making some approximate  and unfounded guesses about peasant life in communist Cuba. Joan quietly but firmly informed me of the sad and sorry realities, at least as he had observed them firsthand in one small community in the neglected eastern  interior.  Since then I have I have been  more careful to remember what I did not know about the island.

My early lived experiences of Latin America came from Bolivia (later also Chile and Argentina) rather than the Caribbean.  In due course Joan  also  undertook fieldwork in the Andes, and again  he saw from the bottom up realities that I was mainly aware from the top (the capital cities) down.  In particular, I recall that he taught in the Universidad de Huancayo (in Central Peru), around the time that it was becoming the epicenter of what would soon become known as  Senderismo Luminoso. From my privileged vantage point it seemed credible to believe that these “Maoist” intellectuals were indeed true believers in  the doctrines then being exported from Beijing, but again Joan provided a sobering corrective. I recall learning two points in particular. His students came to his courses suffering from malnutrition; and they did not need to believe that a Maoist seizure of state power was really attainable.  It was worthwhile to join the revolutionary struggle so that at least those with enough to eat would find out what it was like to suffer, even if the prospect of emancipation was  just a fantasy serving the ambitions of their leaders. Again, Joan’s anarchism proved closer to reality than my  welfare statism. (I should have known better from the Khmer Rouge).

A decade or so later, when I edited  the Journal of Latin American Studies,  I got the  chance to publish Joan’s ideas on “the environmentalism of the poor”. This was a highly controversial piece, which I believe Past and Present declined on the ground that it romanticized the attitudes of the peasantry towards the natural environment. My impression was  (and remains) that this was an ideal typical rather than a strictly empirical argument, and as such it provided a much needed corrective to the then prevailing cult of the market.

However that may be, Joan then  progressed to a deeper level of social science theorization. Other contributors can say more about his work in the theory of ecological economics and political ecology. My comment here only reflects a  distant personal impression. When I first went to Cuba I recall enquiring in one of their economics departments about how they could calculate national product in the absence of a price mechanism. “We  are Marxists, so we use the labour theory of value” came the reply. It seemed  that the more labour they put into production the greater the value it must  generate. That was the mad logic behind the 10 million ton sugar zafra disaster of 1970. Trained as a Keynesian I took price signals as the markers of social value, although like the Cubans I distrusted exploitative property relations (and I over-rated the physical outputs of commodities, while  downgrading the importance of financial services). By the time Joan was developing his challenge to economic orthodoxy both the Cuban and the Keynesian approaches were being displaced by what can be briefly summed up as “neoliberalism”. All those who thought that something essential was missing from the new calculus of society’s measurement of economic optimization needed to  develop a workable method of precise aggregation other than that underpinning the prevailing orthodoxy. It was a bold and truly radical idea to measure the worth of production in terms of its energy content and environmental impact. Since neither the labour theory of value, nor the physical commodities perspective, could meet this challenge that left a void that ecological economics could endeavor to fill.  Today’s pandemic, and the wider issues that mobilize Extinction Rebellion, demonstrate all too clearly that the values omitted by conventional economic theory are not just optional add-ons or incidental externalities. Ecological economics seeks to measure and incorporate these essential missing realities into our social science understandings of the human predicament (as Barbara Ward told me half a century ago, our top priority should be “the care and maintenance of a small planet).

My two most recent encounters with Joan were both occasioned by his return visits to Oxford. He played a leading role in an informal one-day  seminar that I organized in Nuffield Place (the former country house of the college benefactor, Lord Nuffield). At that time what most struck me was the impact his ideas were having outside their initial audiences  in southern Europe and in Latin America.  On his latest visit he told me that when he first arrived at Oxford and revealed to Raymond Carr the depths of his opposition to "franquismo”,  the great English historian of Spain just laughed and said “I’m afraid you backed the wrong hose, old boy”.  “I have never backed a horse  in my life, and I couldn’t understand what he meant”, he told me ruefully. I did not like to tell him that another (in other respects admirable) British academic had said to me, after hearing a presentation by Joan, “You can see why the Nationalists said  “viva la muerte” – the only way to cope with a mind like that is to stop it for good”. It was also clear to me on that visit (only last year) that  radical ecological theorists and  ethnographers from  Asia, as well as across Europe and the Americas, were keenly following up on his insights. I also understand  that he continues to play a lively (and provocative) role in Catalan academia and politics. This particular brain was never stopped. Perhaps my original informant from Tossa del Mar has rallied to his banner? And maybe there are still Andaluces de Jaen  who honour Miguel Hernandez and who cultivate their olive groves  on Joan’s principles of ecological integrity.