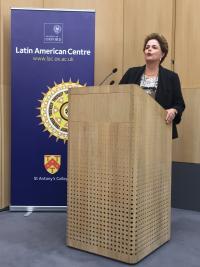 On 7 May 2018, the Latin American Centre and Oxford Women in Politics (OXWiP) hosted a lecture by Dilma Rousseff, president of Brazil from 2011 to 2016. Speaking to a packed auditorium, President Dilma reflected on her early life in resistance to the 1964-1985 dictatorship in Brazil, her two elections to the presidency, the challenges surrounding her removal from office by Congress in 2016, and the controversy surrounding the recent imprisonment of her predecessor, Luiz Inacio Lula da Silva. The visit was organized by Antonian MPP candidate Juliana Moura Bueno and was co-chaired by Profs Leigh Payne and Timothy Power.