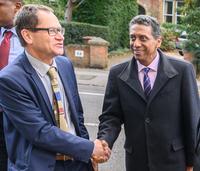 President Faure was received at the St Antony’s College on the 18 October by the Warden of the College, Professor Roger Goodman

The Challenges of Protecting the Oceans – President Faure of Seychelles

The Seychelles‘ lifeline is sustained by its vast ocean. A host to 94,000 people, covering over 452 km of land engulfed in a vibrant blue ecosystem, the Seychelles’ story is analogous to other small island nations. Despite continuing to attract 273,000 tourists annually, debris carried by tides in the Indian Ocean pollute its waters causing environmental degradation. Coupled with the overshadowing fear of rising sea levels, small islands of this kind are therefore at the forefront of climate issues. In his lecture at the African Leaders Lecture Series of the African Studies Centre on Friday 18th October 2019, President Danny Faure concluded that, in a time of ecological crisis, only greater international solidarity and global action can mitigate a potential catastrophe. The President’s lecture was ‘Protecting Our Oceans: The Seychelles Experience.’

President Faure was received at the St Antony’s College by the Warden of the College, Professor Roger Goodman, the Head of the Oxford School of Global and Area Studies (OSGA), Professor Tim Power, and the Director of the African Studies Centre, Professor Wale Adebanwi.

This is not the first time President Faure posed this pertinent issue. In fact, his commitment to marine conservation led him to take a 400 feet dive below the ocean’s surface facilitated by the Oxford-based Nekton mission (https://nektonmission.org/) to present an address to the world to encourage global action, an effort unprecedented amongst world leaders (https://www.youtube.com/watch?v=Cf_F-9sbMmM). President Faure’s position was clear: ‘Oceans cover over two-thirds of the world’s surface but remain, for the most part, uncharted’. Refusing to be hampered by uncertainty, Faure has instilled the need for greater research in the Seychelles surrounding waters. Since the beginning of his term in 2016, Faure has striven to propel the Seychelles as a leading force in marine technology. Having just realised middle income status in 2015, the Seychelles economy with the help of blue bonds investment has rapidly expanded to become what Faure calls a ‘blue economy’. Over this period, 300 research deployments have taken place, helping the Seychelles reach its goal to protect almost a third of its national waters by 2020.

But what of his global appeal? All over the world the issue of climate change continues to gain salience in national discourses, although, with limited results. The question remains whether enough is being done to meet environmental targets. On the African Continent, Faure expresses optimism in strengthened alliances and greater African unity. He asserted that the ‘Oceans are the next frontiers of the world’, adding that the oceans therefore should not be left to ruins for future generations. Building partnerships across the globe to achieve his marine strategy, President Faure believes that Seychelles has become a ‘global thought leader in sustainable governance’.

Before his lecture, President Faure and his entourage which included Ambassador Barry Faure, the Secretary of State for Foreign Affairs and The Blue Economy, Mrs Aude Labaleine, Secretary of State for Presidential Affairs, Ambassador Derick Ally, Seychelles High Commissioner to the UK, Mrs Jacqueline Moustache-Belle, Chief of Presidential Protocol Affairs, and Mr Terry Romain, Principal Counsellor in the Seychelles High Commission, were hosted to a reception at the Investcorp Building in the College. They were joined by ASC staff, students and members of the Centre’s International Advisory Board, Mr Alex Duncan, Mr Ivor Agyeman-Duah, and Mr Thomas Svanikier – and his wife, Ambassador Johanna Svanikier.

After the president’s lecture, the Q&A session, moderated by Professor Wale Adebanwi, the Director of African Studies Centre, reminded us that the Seychelles isn’t without its obstacles, high rates of tourism and social ills put pressure on the socioeconomic situation of its inhabitants. However, with Seychelles marine territory making up three times its landmass, it has had little choice in making ocean conservation its priority. The onus is now on developed nations and neighbours responsible for ecological damage to engage further in technological exchange, information sharing and, most of all, in action.

By Kenza Camara (Student in the MSc African Studies Programme)